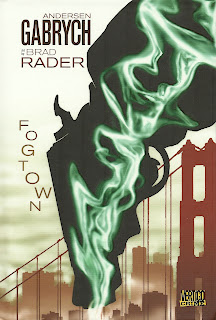 Noir to the core. Raw, bleak, brutal, and compelling as hell to read.

Frank Grissel is a self-loathing, slumming Private Eye named with enough personal baggage to drown himself in the gutter. His investigation into the disappearance of a young prostitute named Carmen leads him into the more unappealing aspects of San Francisco circa 1953. The local priest seems to be hiding something, and the sexy “sex psychologist” Dr. Grey has more invested in local prostitutes than just research. But to find the girl and solve the case, Grissel will have to plumb the worst parts of society and admit to a lot of things he’s been drowning in alcohol and running from his whole life.

Written by Andersen Gabrych with art by Brad Rader, Fogtown is marks another triumph for DC Comics’ Vertigo Crime series. It is also the grittiest of the bunch. Whereas some of the earlier books used elements of horror-fantasy (like Jason Starr and Mick Bertilorenzi’s The Chill), Gabrych and Rader are much more rooted in reality. Their style – from the snappy dialogue and hardboiled narration to the cinematic, chiaroscuro artwork – is deeply rooted in Noir tradition. Take a look at these quotes: 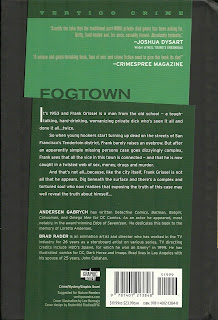 “In a flash, her Jade eyes tear me apart, hungrily look at each piece, and put me back together again.”

“You don’t care about that girl or her mother. No, you’re an over-the-hill drunk who only cares about killing the regret over every bad choice you’ve ever made.”

“I run out of instinct. And it hits me. I ain’t got nowhere to go. No one who’ll have me. I never done nothing right. My whole life. I’m just a pice of shit in this city full of shit. I wanna tear my skin off. Turn into somebody different. I gotta get outta this town.”

“I’m making a noose outta all the loose threads of this job. I’m a shit detective. They could’a got some Pinkerton dick to find Carmen. They didn’t want a dick. They wanted a patsy. I might be a lotta shameful things. But this dick ain’t nobody’s patsy.”

That last quote conjures up memories of Dashiell Hammett’s Sam Spade, and the cruel revelations at the end of The Maltese Falcon. Spade doesn’t play the patsy to anyone. Grissel would like to say the same, but unfortunately he can’t, because he did play the patsy. To a lot of people. Namely himself.

Grissel brings to mind an essay written by Dave White called "HEY... Slacker... Get a JOB!!!" for the Do Some Damage blog collective. I’m not sure if he had Fogtown in mind, but it fits in with the overall point of his essay: “It seems the traditional PI is fading and being replaced with another kind of PI. The slacker PI… Guys who really don't want to be PIs but need a way to pay the bills.” He draws a comparison with the traditional model of value-driven PI’s epitomized by Chandler’s Marlowe.

The idea of a disengaged Private Eye isn’t new – look at Jonathan Lattimer’s Karl Craven in Solomon’s Vineyard or even Bill Crane in The Dead Don’t Care – but White’s observation is astute and brings light to Grissel’s character. White says that, “I feel it adds to the suspense. Will the PI do what's right and solve the case? Or will things get so bad he'll just walk away.” As we are reminded throughout Fogtown, Grissel has run away many times before in the past. So, the question remains, will he run away again? Or will he own up to who he is and try to set things straight?

Facing the parts of ourselves we want to forget about. Learning to accept who we are. This, as much as any detective assignment, is the Noir’s protagonist’s challenge.

With literary shades of Woolrich and Spillane, as well as visual echoes of both Film Noir and early comics like The Spirit and Batman, Andersen Gabrych and Brad Rader have create a Noir aficionado’s delight with Fogtown.
at September 25, 2010