"Who Was that Lady? Craig Rice: The Queen of Screwball Mystery" by Jeffrey Marks (Delphi, 2001) 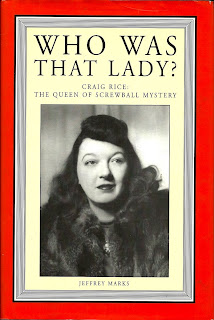 Readers generally only know one side to Craig Rice. She was the author of a beloved series of comedic crime capers starring lawyer John J. Malone, heiress Helena Brand, and press agent Jake Justus. As Jeffrey Marks points out in his illuminating and compelling biography, Who Was that Lady? Craig Rice: The Queen of Screwball Mystery, there was a great deal of pain and suffering behind every laugh, bruises behind every wisecrack, and a lifetime of failed relationships that inspired the close bond between her memorable fictional sleuths. Rice’s life is a paradox as complex as any of her plots: she was talented but tormented; loved and reviled; and strong-willed in some ways but weak in so many more. She was the living embodiment of Edna St. Vincent Millay’s poem, “My candle burns at both ends; It will not last the night; But ah, my foes, and ah, my friends; It gives a lovely light!” For Rice, the light was short lived, and failure came as quickly as success and lasted twice as long.

The writer that would become Craig Rice was born Georgiana Craig, the daughter of two artist. Shortly after her birth, the parents would abandon their child to return to Europe to paint, leaving Georgiana to be raised by her aunt and uncle, the Rices. They would eventually adopt her, and Georgiana would take their name as her own. Jeffrey Marks locates this as the central conflict in Craig Rice’s life and work: most of her novels deal with orphans or those who have been abandoned in one way or another, while in her own life Rice would cling to mentally and physically abusive men out of fear of being alone. As Marks points out, Rice would wind up repeating her own mother’s decisions and leave her children with nannies and relatives. Why she would do that, after being so scarred by the same decisions, is still up for speculation. 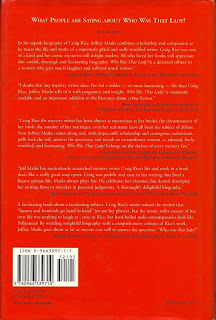 Leaving college after only one year, Rice became a free-spirited Bohemian, making the rounds of the big city, attending lots of parties, and becoming a crime reporter. She made a living as a journalist during the Great Depression, and turned to writing novels by the end of the 1930s, beginning with 8 Faces at 3 in 1939, which introduced the world to Malone, Brand and Justus. Their alcohol-infused adventures in and around Chicago continued in a slew of novels written over a short period time. In her first five years as a novelist, Rice would publish an astonishing 16 novels (7 of which were about Malone and company).

Alcoholism, depression, and a series of bad marriages would slowly bring her writing to a halt, ruin her ties to the industry, and destroy her health. Her many husbands were all writers, none of whom were as talent or successful as Rice. Jeffrey Marks points out that one of them, Lenny Lipton, was especially poisonous: after deriding popular fiction (in spite of the fact that his “literature” never sold and got horrible reviews), he would eventually sue her and claim partial ownership of all her writing in order to continue living off Rice’s success after they had broken up. He later tried to join the Beat movement, and was unsuccessful at that, as well.

Marks also makes a strong case that Rice was an unfortunate victim of her time. Her alcoholism and time spent in hospitals became vicious news stories, and even her cover story in Time Magazine is unnecessarily harsh, influenced by the stricter morals of the day. As Rice points out, however, many of Rice’s peers—the male writers—were also alcoholics but did not suffer the stigma that she did. Also, Rice’s bipolar conditions were unable to be treated at hospitals at the time, leaving her few options except to fall back into the same cycle of depression and drinking time and again. That type of living took its toll on Rice, and it eventually killed her when she fell down the stairs, alone in her house. She was 49 years old.

Who Was that Lady? Craig Rice: The Queen of Screwball Mystery could be called a critical bio-bibliography. Jeffrey Marks writes about Craig Rice with great sympathy, but always with an insightful, critical eye. Marks proves to be as perceptive a critic as he is a biographer and researcher. He locates the autobiographical strands of her work, smartly connecting them to her own life. Just as important, he also places her work in context to the mystery field at the time, as well as compares her books to each other, tracing their development over the years as her quality rose rapidly in the early 1940s, then fell as a result of her personal struggles, only to rise again shortly before her untimely death. Concise synopses and succinct reviews of all her novels (and many of her short stories) provides an indispensable guide for navigating the ups-and-downs of Craig Rice’s career.

One of the most important and successful mystery writers of her day, Rice is sadly forgotten today. While many of her books were reprinted in the late 1980s and early 1990s by IPL, only one novel and one collection of stories is in print today. Rue Morgue Press has released Home Sweet Homicide (which Marks calls her greatest book) and Crippen and Landau have released a collection of the Malone stories, Murder, Mystery and Malone, which was edited by Marks. We can only hope that her innovative, inimitable, and undeniably delightful novels see the light of day again sometime soon. In the meantime, we have Marks’ wonderful biography, an essential for fans of Rice’s work, and of great interest for anyone interested in the history of mystery and crime fiction.