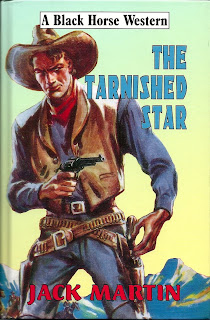 With the recent release of Gary Dobbs’ ebook A Policeman’s Lot, I wanted to say a few words about his first novel, The Tarnished Star, a Black Horse Western published under the pseudonym Jack Martin. The rip-roaring Western adventure is an assured, confident debut. Followers of Dobbs’ blog The Tainted Archive are well aware of the British author’s deep knowledge of both the fictional literature and the actual history of the Wild West. The Tarnished Star is steeped in Western lore, but Dobbs’ voice is clearly his own. He shows that he knows how to write an original story that still respects the genre’s traditions.

The novel starts with an archetypal Western scenario—the sheriff who stands alone against the villains—and gives it a twist. What if Gary Cooper in High Noon stepped down and gave up? What would make a strong-willed sheriff give in to the bad guys? How would the town react? And how would the sheriff deal with the shame and humiliation of letting himself, and his people, down?

Those are some of the thought-provoking questions that drive The Tarnished Star. As the book opens, Sheriff Cole Masters has arrested Sam Bowden for killing a prostitute. Sam is the rotten son of a rich and powerful rancher named Clem Bowden, and Clem won’t stand for his son’s incarceration. When he and his henchmen show up at the jail armed and dangerous, Cole gives in and lets them take not only Sam, but also his badge. 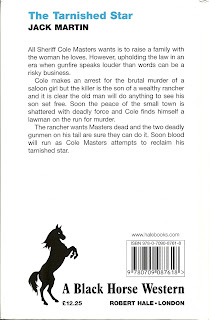 But when Cole realizes the Bowdens are going to frame him for murder, he takes to the open range in an attempt to reach the stagecoach and talk to the Judge before he reaches town. With his name cleared, maybe Cole could finally bring law and order to the town of Squaw, and settle down with Jessie, the local schoolteacher. The only thing in his way, however, is the Bowdens, who will stop at nothing to prevent Cole from reaching the stage on time.

The book offers great Western action and atmosphere, as well as strong, compelling characters. By switching between different characters’ points of view, Dobbs sustains dramatic tension throughout while giving us insight into both the heroes and villains of the story. I especially liked the desert chase as Bowden’s men tracked Cole into the mountains and caves, which culminates in a classic shoot-out. It is a promising debut, and I’m looking forward to reading more of Dobbs’ books.

For more information on The Tarnished Star, you can revisit an interview I conducted with Dobbs when the book was released. The book is still available online through The Book Depository.

Here are a couple of my favorite quotes:

“Sam struck out with the back of his hand, slapping the old man across the jaw with a sound like fish guts hitting a sink.”

“For now the only emotion he needed was the seething anger in the pit of his stomach, for it would keep him fresh, help him remain focused on what had to be done.”
at July 17, 2010