"The Killer Inside Me" Take Two: Jake Hinkson and Nerd of Noir 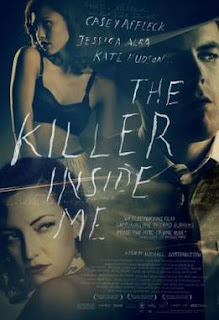 Two great reviews of Michael Winterbottom's recent adaptation of Jim Thompson's "The Killer Inside Me" have appeared on the internet. Though they take different stances on the film (one is more negative while the other is more positive), both offer perceptive takes on what has already proven to be one of the most talked about and argued movies of the year. Something tells me this is only the beginning of the conversation regarding this movie. Love it or hate it, it provokes strong opinions from viewers.

First up is The Night Editor Jake Hinkson's eloquent analysis. Hinkson has a real feeling for Thompson's novel, and he points out that while the plot is basically the same, it is the tonal differences that are so crucial and so misinterpreted by Winterbottom.

"In a weird way, this is actually something of a cop out. Thomspon's Ford is goofier, livelier, and finally colder than Winterbottom's interpretation. He has the essential component of every psychopath: a total lack of empathy. People aren't people to him. Yet in this film, Lou has real feelings for Joyce... Instead of clarifying Lou, the film tries to apologize for him. He loves her but he's sick."

Over at Spinetingler, the always insightful Nerd of Noir is more positive (but still critical) of the adaptation.

"But though some major charms of the book are missing in the adaptation, it’d be a tall order for a director as skilled as Michael Winterbottom (the Steven Soderbergh of the U.K.) to fuck up a main character and a plot this juicy – especially considering the cast he’s assembled."

The Nerd is especially impressed with Casey Affleck's performance as Lou Ford.

"Whether such a pulpy thriller can support the infamous violent scenes is up to the individual (I think the film pulls them off), but there is no getting around the fucking brilliance of Casey Affleck’s fantastic turn as Lou."

What both Jake Hinkson and the Nerd of Noir seem to agree on is that the movie misses the dark humor of Thompson's book, but that Winterbottom has assembled an outstanding dream cast headed by Casey Affleck. I reviewed the movie a couple weeks ago as well, and I am inclined to agree with both Hinkson and the Nerd on these two points.
at July 07, 2010