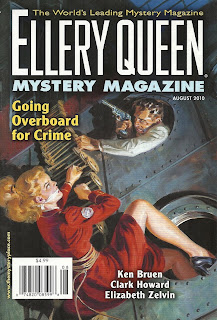 Ken Bruen, that elegant bard of noir hailing from Ireland, takes on the Wild West in his latest story, “Colt.” It appears in the August 2010 issue of Ellery Queen Magazine. In just six short pages, Bruen manages to pack in all that we love about his work—the personal tragedies of Tower (co-written with Reed Farrel Coleman), the inimitable punchy poetry of The Guards, and the gut-busting humor of Bust, Slide, and The Max (all co-written with Jason Starr)—but he also manages to show a new side to his art as well. Bruen is damn good at Westerns! It's funny, action-packed, and packs a solid punch at the end, and I can't recommend it highly enough.

“I had me a thirst, been riding hard, real hard, to get way the hell outa Arizona, they wanted me real bad in that godforsaken place

“This here is about a gal

The story is about a wandering gunman who learns the hard way why you keep you mouth shut at the bar. In between shots of whiskey he hears of an impending hanging that has everyone in town excited. Why, you ask? Because it isn’t just any old criminal at the end of the rope, it is a woman. And just who is that woman…someone from the gunman’s past that he can’t get out of his mind.

“Colt” is thoroughly a Western, but there are still traces of Bruen’s noir sensibility lurking just beneath the surface. How many of noir’s fallen heroes (or ennobled villains, depending on how you look at them) started like this? “I’d made me some gold offa a claim that was already staked out and I was looking to spend it, met Molly in a saloon and she not only took off with my stash but my dumbass heart as well.” Clearly Bruen is having a grand ol’ time with lines like these, and we’re laughing along with him, but were this to be rewritten without humor, we’d be looking straight at the start of a classic pulp tragedy.

Bruen wrote “Colt” as a tribute to the late Robert B. Parker. As he explains, “Robert Parker was one of the reasons so many writers turned to mysteries… He made it so deceptively easy to read. But there will never be another of his talent, I miss him so.”

If this isn’t enough of a reason to pick up the August 2010 issue of EQMM, just take a look at that gorgeous vintage pulp painting by Norman Saunders called “Jump Ship” from 1950. They don’t make ‘em like that anymore…well, Glen Orbik does, and Robert McGinnis is still around. Let us be thankful for this.
at July 10, 2010