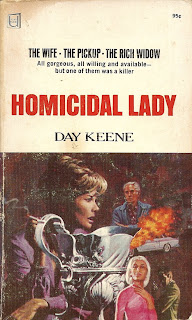 Day Keene delivers another solid, well-crafted mystery with Homicidal Lady, originally published by Graphic in 1954. While it doesn’t reach the heights of Home is the Sailor, or even To Kiss, or Kill, the novel still offers an entertaining story despite its predictability. The book is, after all, called Homicidal Lady, which points an accusatory finger even before the story begins. Still, it is a sign of Keene’s skill that he keeps us reading even when we think we know how it will end.

The story is about Tod Talbot, state’s attorney for Florida with a flawless record. His most recent case resulted in the death penalty for James Conley, a convicted bank robber. Talbot’s wife, Jane Painter, was Conley’s attorney. When she lost the case, she walked out on her husband. If that wasn’t bad enough, moments after Conley’s death, a young punk is found dead, apparently of suicide, with a note admitting that he was the robber, not Conley. In that moment, Conley’s life and career fall completely apart. 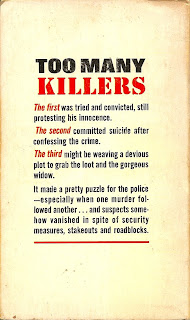 But that is only the beginning. Out of Talbot’s past comes Vickie Paul, a young woman he helped out years ago who has is hopelessly in love with him and is convinced that the punk’s suicide was faked in order to defame Talbot. In the course of their investigation, Talbot finds himself framed for the murder of Conley’s wife. On the run from the cops, Talbot must appeal to his wife, Jane, for help. Who to trust—Jane, who ran out on him, or Vickie, the mysterious woman whom he knows nothing about?

Homicidal Lady is a case of a novel in which the main situation is actually more sympathetic than main character. By that I mean that we don’t align ourselves with Talbot the way we do Swede in Home is the Sailor or Barney Mandell in To Kiss, or Kill. I felt for his plight, but I never learned enough about his character to feel for him one way or the other. The character of Vickie, likewise, is a little overly giving with her adoration. It works for the story (and is a very convenient plot device), but I know that Keene is capable of a little more dimensionality.

Fans of 1950s paperback originals will certainly enjoy this, and Keene’s depiction of Florida is as vivid as ever. Those unfamiliar with Keene’s work would do well to pick up Hard Case Crime’s reprint of Home is the Sailor.

As a side note, the cover art to the Unibook reprint that I have was later used as the cover to James Reasoner's excellent Texas Wind.

A few of my favorite lines from the book:

“Ambition does strange things to a man.”

“No friendship between two men was half as strong as one hair from a woman’s head.”

“But cats are all one color in the dark. You can even change a cat’s color, some folks day.”