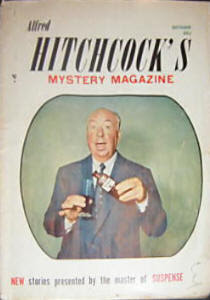 I know H.A. DeRosso mainly from his gripping, noir-ish Western .45, so it was a real pleasure finding his short story “The Executioner” in the October 1957 issue of Alfred Hitchcock’s Mystery Magazine. Here he departs from the Western genre he is mostly associated with and delivers a terrific story of dystopian politics set in Latin America.

The nameless protagonist is a Captain in the military, in charge of the executions. Ramon Laramate, a dissident, is to be executed shortly. The Captain’s girlfriend, Maria Alba, testified against Laramate and begs to watch him die. Her persistence, however, worries the Captain.

DeRosso has an ironic, and decidedly dark, sense of humor. Even if it is slightly predictable, there is still a good punch at the end of the story. Overall, it is a well-structured and smartly paced story. The seeds for the twist are planted early on, and it is fun to watch as DeRosso develops them into the final twist ending.

(For those who are interested, last year on Pulp Serenade I also featured another excellent short story by DeRosso called "Hide-Away." It is about a Private Detective with the unpleasant task of hunting down a former partner.)