"Draw: The Greatest Gunfights of the American West" by James Reasoner (Berkley, 2003) 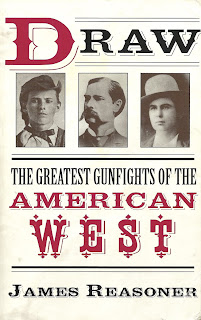 What happens when you combine rip-roarin' Western action with legendary true stories and one of best working writers of the genre? James Reasoner's Draw: The Greatest Gunfights of the American West. This exciting, non-fiction book looks at the men (and some women) behind the guns that blazed trails across America. Cowboys, bandits, sheriffs, bank robbers, marshals, horse thieves, card players, posses, gangs, and even a little boy suffering from consumption--they all carried guns, and they all had to use them, sometimes in the name of the law, sometimes in the name of vengeance, and sometimes in the name of violence. Behind each bullet is a story, and Reasoner gets to the heart of each and every one.

What I most appreciated about the book is Reasoner's approach to the material. The past isn't chiseled in stone like a cold tombstone, but lives and breathes. He begins each chapter with a striking scene, a cliffhanger that introduces us to the character and the defining moment in their lives--and often it is their last moment, as well. From there Reasoner takes us back, giving us a concise but comprehensive look at all the characters and the events leading up to the climactic showdown.

A humanist historian, Reasoner is as interested in a character's psychology and emotions as much as his actions. And because he can find a little sympathy for even the most ruthless gunslinger, the characters come off as real people instead of historical documents, and even the most timeworn tales seem fresh again. He gives a new perspective on the Earp clan by focusing on the forgotten brother, Warren, who was the only one not present for that historic battle in Tombstone, and who lived his life in the shadows of his brothers' legacies. And even Bob Ford (the man who shot Jesse James) and Pat Garret (the man who shot Billy the Kid) are given sympathy, as Reasoner tries to understand their disappointment of never eclipsing the notorious men they killed. 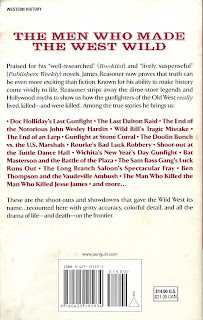 Reasoner is smart to realize that history shouldn't always be written by the victors. He not only tells the story from the viewpoints of all involved, but also respects the unresolved mysteries and speculations, those wondrous questions that linger on more than a hundred years later. Some of my favorite moments involve those characters who made their mark and then disappeared into history, like the young, consumptive boy Riley who, after seeing his gun-toting idol shot down, surprised the whole town of Wichita by doing some fancy shooting of his own. After avenging his fallen friend, the little boy vanished without a trace. History lost track of him, and his fate remains a mystery to this day.

Beneath the surface of Draw, Reasoner is doing more than just telling the stories of famous gunfighters. Through these stories, he also chronicles the larger history of the West, from the initial migration, to the establishing of of industry, towns, and law and order. The book ends, fittingly, with the settling and taming of the West, and the end of a spectacular, bloody, and exciting era of gunfighters.

The book is still in print from Berkley. Reasoner also keeps a blog called Rough Edges. Previously on Pulp Serenade I interviewed Reasoner about his book Hunt at the Well of Eternity, and I also reviewed his books Texas Wind and Old Times' Sake.

Here are a couple of my favorite quotes from the book:

"The gambler from the east was fast, all right, but his aim was wild, wild as hell, and his speed hadn't bought him a thing except a few ounces of lead."

"They were young, in their twenties, but hardly children. In fact, their eyes were older than their years. They were the eyes of men who had been both the hunters--and the hunted."
at July 21, 2010