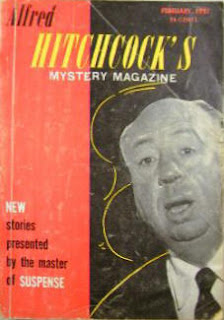 Walt Grove wrote one of my favorite Gold Medal novels, Hell-Bent for Danger, which I’d rank up there with any of the publisher’s more famous novels and authors. When I found his story, “The Deep, Deep Secret” in the February 1957 issue of Alfred Hitchcock’s Mystery Magazine, I was excited, as Grove’s reputation seems to have unfortunately faded, leaving all of his work out of print at the moment. The story, I was happy to discover, was marvelous and did not disappoint one bit.

“The Deep, Deep Secret” is an unusual, innovative twist on the “coming of age” genre. Gerry—short for Geraldine—wants to share a secret with her boyfriend, Earl. When the two return from skinny-dipping, however, a mysterious man claiming to be a police officer is waiting for them. While he doesn’t arrest them for indecent exposure, he begins stalking both of the youths and makes several sexual advances towards Gerry. Afraid of what the town and their families will think if their indiscretion was exposed, Gerry and Earl put off asking for help. Soon the situation spirals out of control, and Gerry must grow up and deal with the situation on her own.

As Grove showed in Hell-Bent for Danger, he has a real feel for the darker impulses hiding within suburban security. Throughout “The Deep, Deep Secret,” Gerry goes through this transforming descent, first through desire, then anxiety, desperation, and finally action, when she is forced to do things she never thought herself capable of. In this way, Grove takes the “coming of age” cycle to another level: what begins as burgeoning sexuality in the character blossoms into something decidedly more deadly. That sense of threat and urgency, so primal to adolescence, comes across naturally in this story.

Earl and the officer, while their roles are smaller, are no less well defined. As Gerry continues to take steps forward, both of the male characters come more and more into focus. The officer is no less a coward than Earl. Such critical portrayals of masculinity come as no surprise after Hell-Bent for Danger, which also features male protagonists who are ultimately emasculated for giving into their desires.

All in all, a great story by an underrated writer. I have several more Walt Grove stories at home, and I’m very much looking forward to reading them.