Catching up with Beat to a Pulp 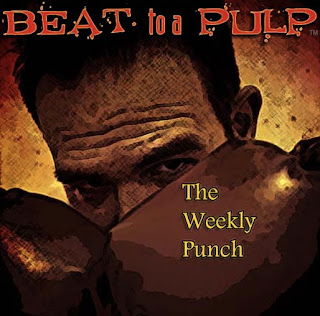 The folks over at Beat to a Pulp, editors David Cranmer and Elaine Ash, have been keeping real busy this summer. Since they came out swinging over a year ago, they've been hurling pulpy left hooks every week, and they're connecting damn near every time, too. Selectivity and consistency are two of the biggest merits of BTAP, and I have no doubt that Cranmer and Ash will keep up the good work for a long time coming.

Now, if some of you are like me, sometimes the TBR pile gets overwhelming and you fall behind in your reading. While I look forward to their Sunday punches every week, lately I've fallen behind. So, consider this posting a way to "catch up" with BTAP, as well as get a sneak peak at some of the punches they have in store for the future.

"Miles to Go" is a Western by Edward A. Grainger, Cranmer's pen-name for his Western fiction. Continuing with characters that first appeared in Grainger's "Cash Laramie and the Masked Devil" (from A Fistful of Legends), this new story follows the black marshal Gideon Miles as he hunts down an escaped criminal named Van Jones and his gang. Cranmer shows he's as perceptive at writing as he is at editing, giving us an original story that looks at an underexplored aspect of Western history (the legacy of African Americans) with a compelling and complex pair of main characters, and with plenty of that good ol' Western action. I'm looking forward to more adventures with Cash and Miles.

David King's "Collision" shows BTAP expanding its breadth and trying something new: publishing an epic sci-fi poem. Even classic pulpsters like Fredric Brown wrote and published poetry occasionally, but King takes narrative poetry to a whole new level, crafting an intricate and imaginative story about an invention that starts altering reality as we know it. Things we see start disappearing, and things we've never seen before start appearing. Publishing this one was well worth the risk.

BTAP tired something new again with Ryle Smith's "One Good Turn," this time venturing into cinematic territories. Smith's six minute movie is about a chance encounter between a jogger and a priest who meet on a park bench, one of whom might be a notorious killer who is terrorizing the city. Smartly crafted without the aid of dialogue (no easy feat), the film ends with a darkly wry twist.

Patti Abbott's "At the Café Sabarsky" is an eloquently dark and understated tale of a young woman who unexpectedly shares lunch with an older man at a museum and begins to reconsider the abusive relationship she is currently in. Patti is as precise with subtle details as she is with her last-minute punches in the final paragraphs, and this story is no exception. (On a side note, I've been to the Café Sabarsky, which is located in NYC's Neue Galerie. It's a lovely restaurant and the food is delicious. The story made me want to make a second visit sometime in the near future.)

Recently, BTAP featured a rip roaring pirate adventure by Evan Lewis called "The Mercy of Jean Lafitte." One of BTAP's most popular stories, it is about the pirate Jean Lafitte who discovers he was played for a patsy when he was told about a mysterious Spanish treasure ship. While he was out looking for the ship, someone stole his home base, and he wants to get it back before they get to his rum! Outnumbered, surrounded by cannibalistic natives, and with a crew that doesn't know how to swim, Lafitte must figure out how to get his revenge. This is one hell of a good read: inventive, funny, and suspenseful.

And just last week they offered the war story "The Path to Brighton" by David Pilling. Set in the aftermath of World War I in England, a soldier named Sam Burgess receives a mysterious letter from his former captain asking to meeting near the Brighton Pier. Along the way, he reminisces about their time spent together in a German prison camp, and the questions that were never answered one fateful day. It's another winning story that shows the site unafraid to take steps into new territory.

If that weren't enough, BTAP has a busy lineup for the future. Next week is a fantasy/horror story by Dave Zeltserman (author of Pariah and the upcoming book The Caretaker of Lorne Field) called "King." Also in the upcoming lineup is a story by Anthony Neil Smith (author of Psychosomatic and Hogdoggin').

And this fall will also see their first print release, Beat to a Pulp: Round One. I'm thrilled to say that I am a part of this anthology with my essay "The History of Pulp." The rest of the lineup has me blushing -- it is an honor to share the pages with some of my favorite writers and some good friends of mine.

I'd say, "That's all folks," but I have the suspicion that Elaine and David have a few more tricks up their sleeves. Check back to Beat to a Pulp often for more updates.
at July 08, 2010

Email ThisBlogThis!Share to TwitterShare to FacebookShare to Pinterest
Labels: Beat to a Pulp