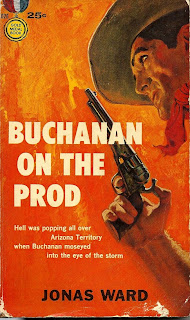 Published by Gold Medal in 1962, Buchanan on the Prod is the sixth entry in the Buchanan saga, about a rambling gunfighter from West Texas.

Buchanan on the Prod is entertaining and lively, with strong atmosphere, lots of action, and occasional bits of comedy and romance to keep the spirit light. Buchanan is a very likeable character, someone who is fast on the draw, but who will also take a moment to wink at a girl while the smoke is still clearing. He’s charming but not sentimental, he has morals but he’s not preachy, and he’s inventive when it comes to fighting. The scenario reminds a little of Jack Schaeffer’s classic Shane, but the main characters were different enough that Buchanan on the Prod didn’t seem too derivative. 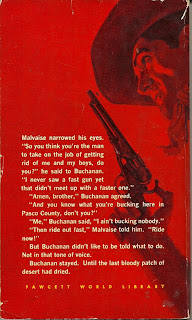 The first five Buchanan books were written under the pen name of Jonas Ward by William Ard. During the writing of the sixth novel, Buchanan on the Prod, Ard passed away, so Robert Silverberg took over and completed this novel. Later on, several other writers who assumed the Jonas Ward pseudonym continued the series. A full bibliography and informative history on the Buchanan books is available at Mystery File.

All in all, this is a classic Western that is sure to entertain. I’ll be on the lookout for the rest of the Buchanan series, that’s for sure. Here are a few of my favorite quotes from the book:

“Buchanan had something more than just a scholarly interest in feminine pulchritude.”