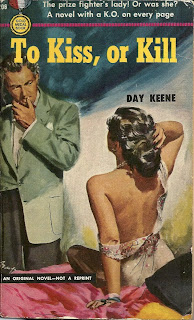 You got to admit, Day Keene knows how to open a book with a bang. Take the opening line of To Kiss, or Kill, published by Gold Medal in 1951: “You never can tell what a big, tough Polish boy will do when he finds a nude blonde in his bathroom.” What more do you need to draw a reader into the story? Concise and vivid, Keene gives us enough details to tantalize our imagination about what has happened in the past that lead up to this moment, and enough clues to make us anxious over what will happen next. It is a prime example of the sort of economical, visceral, and absolutely gripping writing that comes to mind when we think of the pulp fiction school of crime writing that took over the paperback industry in the early 1950s. Bill Crider felt similarly in his own review of the book: “Who could resist reading on after a beginning like that? Not me, that's for sure.”

The big tough Polish boy Keene is writing about is Barney Mandell, an ex-prizefighter who has taken one too many blows to the skull. Before he got punch drunk, he married Gale Ebbling, a socialite from a wealthy and respected family. It was she and her father who convinced Barney that he was going crazy and that he should enter a sanitarium. When he gets out, two years later, his wife isn’t there waiting for him, so he takes to the bottle and takes to a blonde. When he awakens, she’s dead. The police think he’s gone batty and want him back in the sanitarium. Barney is almost convinced, too, until other bodies start showing up. Soon the Treasury department starts questioning him about a deceased uncle, and then there is the issue of the money he left for his wife to send to his mother while he was away but never was. Dodging bullets and the cops, Barney must now piece together not only what happened in the past two years, but also uncover why it was he was originally committed. 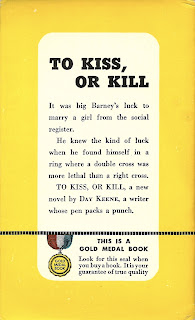 Keene is in top form with To Kiss, or Kill, and his driving pace is pitch perfect. Unfolding over the course of just a couple of frantic days, the momentum never stops, and Barney’s increasing self-doubt and anxiety seems to infect the narrative flow. Cleanly plotted, Keene never gets tripped up in unnecessary exposition. The most pivotal scene to the plot, where Barney finally tears down the house of cards that others built up around him and begins to expose the conspiracy surrounding him, is handled masterfully. Keene’s fine hand maneuvers through the details with clarity and exactitude.

But the sweetness of Keene’s prose isn’t so much in the plot twists as it is in the punches they deliver. Lines like, “Gale was bad. She was evil. She was a part of his blood. She was a dream that would never die…” The sentences are simple enough, but they build upon each other in a way that no one sentence could do. Short and stubborn, they come across like failed valedictions: Barney’s unsuccessful attempt to wipe out the bad girl from his life, the one that brought him so much pain. The last impression of this book, however, is one of prolonged anguish. The mystery is over, the world is seemingly right again—but not for Barney. Those unsettling notes at the end meant that the novel stayed with me for quite some time after it was over.

Also, one of the most striking things about this novel is its title, a clever, pulpy twist on “To be or not to be” from Shakespeare’s Hamlet!

For those with ereaders, the book is available for free courtesy of Munsey’s.