The Killer Inside Me: Jim Thompson vs. Michael Winterbottom 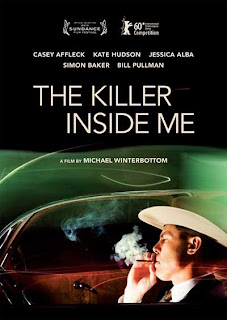 The most recent adaptation of Jim Thompson’s The Killer Inside Me, directed by Michael Winterbottom and adapted by Winterbottom and John Curran, has been stirring up a lot of controversy, both in its depiction of violence and its approach to Thompson’s original novel. The cast is actually quite good—Casey Affleck nails the fragile affability of Lou Ford, and he is supported by an all around solid ensemble with underrated actors like Ned Beatty, Elias Koteas, and Bill Pullman. Even Jessica Alba and Kate Hudson do well in countering their clean-cut Hollywood images as Lou’s bad and good girls—that is, when they are given lines to work with, and are allowed to be more than lifeless punching bags. And the dusty, desert setting of small-town Texas leaves an atmospheric impression that isn’t soon to be forgotten. These are the film’s strong points. However, their weaknesses far outweigh its strengths.

The major problem with Winterbottom’s film is its inability to get a grasp on the inner-life of Lou Ford. Thompson makes us complicit in Lou’s psychotic conspiracy. We’re in on his plan from the start, with him for every decision, no matter how planned or spontaneous. Winterbottom, on the other hand, limits us to being witnesses to Lou’s actions. When he sets his first plan into motion—plotting a double murder—we are not aware of it until he places the first punch. This could be excused by saying that it is easier for a book to get into the head of its protagonist through first-person narration than it is for a film. But to take that route is to admit that Winterbottom wasn’t up for the challenge, or that he couldn’t find creative ways to work around the constraints of cinema. Plenty of other filmmakers have given us access to their main characters psychologies, so why not Lou Ford? 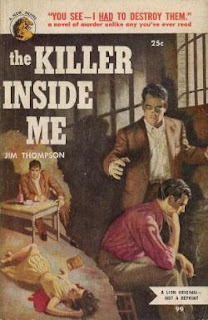 One of the problems is that Thompson never wrote Lou Ford as a character that can be easily broken down and explained. The novel was written in 1952, when Freud and psychoanalysis were increasingly becoming a topic in popular literature and film. Whether it was serial killers or teenage delinquents, psychology was being used to “explain” the characters and their actions. And then along comes Lou Ford—a psychotic sheriff spouting Normal Rockwell, apple pie aphorisms and beating his girlfriends and committing brutal murders. Thompson gives us pieces into his past—childhood sexual encounters, longstanding guilt over his brother, and even a father who was also prone to sexual violence and perversity—but none of these ever gets us closer to figuring out what makes Lou tick. The more Thompson reveals of Lou’s character, the less we truly know of him.

Therein lies the horror of the novel. We never fully understand Lou on an intellectual level. Instead, Thompson makes us understand him on an emotional level. This is how he uses violence: as visceral moments that repel us. The brutality is sensational—not as in exploitation, but because they act on a physical level. Thompson never explicitly moralizes about Lou Ford, but by depicting the violence in such detail he is showing battery for all its ugly reality. It is interesting to compare The Killer Inside Me, published in 1952, to William Inge’s Picnic from 1953, or even Peyton Place in 1956. The latter two were also scandalous in their own times, for (among other things) their depictions of sex in small towns. I wonder what those critics would have thought of Thompson’s book? He blows the lid of middle class morality far more than those other texts. In his own way, by confronting head-on the seedier sides of sex and violence, and not shying away from them, Thompson was making us aware of the awful truth of domestic violence without being didactic.

None of the violence in Winterbottom’s film functions close to the way it did in Thompson’s book. Winterbottom gets the shock value, but without placing it in a moral (or amoral) dimension—and without the psychological connection to the characters—it comes off as vapid and uninteresting. It is uncomfortable to watch Casey Affleck punching Jessica Alba and Kate Hudson for the nakedness of his punches, but it was only the sound and image that made me flinch, not the pangs of complicity of turning the pages and making all of this happen like when I was reading the book. Again, this is one of the challenges that is particular to adapting Thompson’s work. Winterbottom, however, seems to have ignored it.

Ultimately, I had a hard time discerning any perspective of Winterbottom’s towards Thompson’s source material. He seems to merely be visualizing what readers have been doing internally for the past 58 years—taking our mental images of Lou Ford’s terror and bringing it to life. 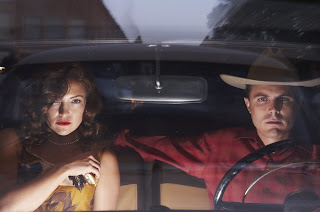 Casey Affleck does a terrific job considering the shortcomings of the writing and directing of the film. Particularly once Lou’s colleagues begin to catch on, Affleck conveys the delicate balance of the sheriff’s mental state, and his struggle to maintain control over the situation. Seeing Affleck coolly smoking a cigar in bed while being interrogated is mesmerizing—he never breaks his calm, not even for a second. His split-second movement from tranquility to savagery is spot-on, and his soft, squeaky voice is perfect for Lou’s country bumpkin manner of speech. It’s a shame that Affleck’s final scene—the moment when Lou Ford makes the decision to shatter his fictional world—is ruined by Winterbottom’s tasteless directing and over-reliance on cheesy, unrealistic special effects. Rarely will you hear me complain that an explosion is unnecessary or gratuitous—and The Killer Inside Me is the exception that proves the rule.
at June 24, 2010