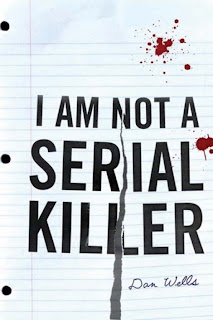 Dan Wells' debut novel, I Am Not a Serial Killer, is fiendishly well-written. Its main character is John Wayne Cleaver, a misfit teenager with a high intellect and a fascination for serial killers. Because he lives above the family mortuary, he gets to indulge in his morbid fascination from a safe perspective. The more he learns about serial killers, however, the more John realizes that he shares in common with them. Determined not to become one of them himself, he creates a list of rules to keep his inner "monster" at bay. All is going well until a series of brutal murders begin occurring in town, and John takes it upon himself to figure who–or what–is behind the killings.

Wells deftly blends humor and horror, sympathy and revulsion, throughout the novel. It is a daring book for a number of reasons. Not only for its up-close-and-personal look at violence tendencies and social alienation amongst teenagers, but also because Wells risks having a main character whose intellect we understand, but whose emotional core remains enigmatic. We do not know where his sociopathic drives come from–and, for that matter, neither does John. Contrasting this is an extremely sympathetic villain whose motivations for killing are not only very clear, but also endearing. That Wells preserves the mystery of his main character is a gusty move that pays off tremendously, and leaves readers eagerly awaiting the next two entries in the John Wayne Cleaver saga. Book two, called Mr. Monster, is due out on September 28 from Tor Books. Book three, recently announced as I Don't Want to Kill You, is still awaiting a release date.

Pulp Serenade: Where did the character of "John Wayne Cleaver" begin, and what about him appealed to you as a writer?

Dan Welles: One day while driving home from my writing group, I was talking to a friend about the Macdonald triad--three traits common to almost all serial killers. My friend said that it would be a cool idea for a book, using a character who had all the traits of a serial killer but was trying not to become one. It took me a year to figure out the best way to turn that into a book, but the character was there from the beginning, and I loved the painful tension it suggested. I also love villains, and in some ways this was an opportunity to write a book about a sympathetic villain instead of a hero. What's not to love?

PS: I've read in other interviews that you, like your main character, are very interested in serial killers. Where did this interest start, and how did it evolve into a novel?

DW: I don't remember where it started, though I do remember my Mom sharing news stories about various local criminals in an attempt to scare me into not talking to strangers. Ted Bundy lived and hunted in my home town, for example, so there was a lot of that "your neighbor could be a killer" vibe already in the background of the community. As for why it interests me today? There's a passage in the first book where John explains his interest to his mother; that's pretty much exactly my explanation as well. 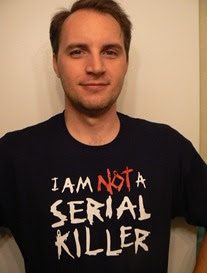 PS: Did you start writing I Am Not a Serial Killer knowing that it would eventually be the first in a trilogy? Or did your conception grow as you developed the character of John Wayne Cleaver?

DW: I always knew he would be a great series character, though I didn't plan out a series or trilogy at first, I just wrote the best novel I could and then tried to sell it. When I did sell it, the publisher asked for two more and I said "yes, sir!" and then tried to figure out how to expand on the ideas with two more books. I'm really pleased with how it turned out, so much so that two or three years from now I might go back and write some more John Cleaver books. We'll see.

PS: A lot of readers will definitely relate to John's alienation as a social outcast in high school. Were any parts of this book particularly autobiographical for you?

DW: Not especially, though it's true that the book shares my distaste for bullies--I recognize that bullies are a big deal for a lot of kids, but in my experience the bullies at school never really got under my skin, so I hate stories about them. I hate books (such as Harry Potter, for example) where the fate of the world hangs in the balance, and yet the main story is all about how that guy in math class is a jerk; that just never works for me. So in I Am Not a Serial Killer, I specifically included a bully just so John could plow past him and not care. If there's a good teen message for the social outcasts buried anywhere in my book, that's it: the only people who care what teenagers think are other teenagers, so don't let them get to you. There are bigger issues to deal with, and if you focus on those you're already a big step up past the bullies.

PS: I was really struck by how sympathetic you were to John's adversary, the demon. Why did you feel it was important to have such a sympathetic villain?

DW: A sympathetic villain was part of the whole point: John is right on the line between hero and villain, which creates really great tension, but if he were fighting an obvious bad guy all of those gray areas would disappear--we wouldn't feel that tension anymore, because everything John did to fight the horrible monster would be inherently more justifiable. Making the villain very sympathetic--arguably more sympathetic than the hero--made every decision harder and more painful, but John had to make them anyway.

PS: At times, the first-person narration reminded me of Fredric Brown, one of my favorite writers. Was he an influence on you at all? If not, who are some of your favorite writers?

DW: I regret that I'm not familiar with Fredric Brown, though I'll definitely look him up. My favorite writers are kind of eclectic: Victor Hugo, Joseph Conrad, Neil Gaiman, Bernard Cornwell, A.A. Milne, Emily Bronte, and so on. None of those are obvious origins for John Cleaver, though, so I don't know what to tell you. I also read a lot of Russian literature, which is probably more of an influence on my style than anything. My favorite book of all time is Dune, by Frank Herbert.

PS: Your descriptions of the embalming process made me flinch more than most movies have! It is extremely visceral writing. What sort of research goes into scenes like those?

DW: Finding resources with descriptions of embalming is pretty easy, but I found that the trick to good storytelling was to search around until I found a mortician website (there are more than you'd expect) with a good FAQ. This is where morticians get on and ask each other questions about weird problems and corner cases, and then other morticians offer advice on what to do to solve them. That's where most of the really good fodder came from, plot-wise, because it let me establish a baseline and then tweak it with problems.

PS: While some parts of the book are grounded in factual descriptions, those related to the demon are rooted more in fantasy, yet they blend together very well. Did you put limits on the more fantastic aspects of the narrative, or create a list of rules as to what can and cannot happen?

DW: I did the same thing with the demon that I did with John's psychology: I figured out how it would work, and then treated it as frankly and plausibly as I could. If someone out there could actually do everything this demon can do, what would happen, how would affect his life? How would the police proceed with the investigation?

PS: I think it was very bold of you to address the issues surrounding violent tendencies in young kids. It is a very controversial topic, and you deal with it head-on, being sensitive but also not shying away from it or treating it lightly. How have readers responded to this aspect of the book? 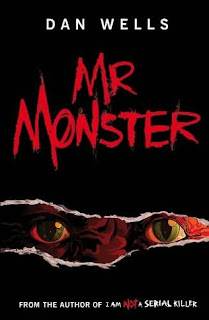 DW: I've gotten a surprising number of emails from fans who struggle with violent and sociopathic tendencies, thanking me for the book. Some of them are grateful to see someone who's worse then they are, and others are grateful to see someone overcoming their inner darkness. I don't know how old they are, because they all rather wisely avoid telling me anything specific about themselves; the emails are very well-written, but a lot of kids with these kinds of problems tend to have an above-average intelligence anyway, so it's hard to say.

PS: Lastly, what can you tell us about your next book, Mr. Monster?

DW: Mr. Monster follows from the ending of the first book: John has found a demon and beaten it, but he had to let his monster loose in order to do it, and inner monsters are very hard things to put away again after you've given them that much freedom. It's kind of a coming-of-age book, you just don't know which one will come of age: John, or Mr. Monster.
at June 27, 2010