Lester Dent on Words and Writing 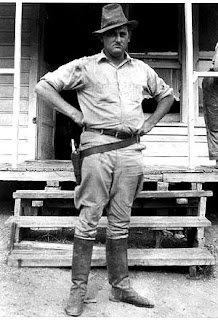 Ever wanted to write like Lester Dent? Bang out 200,000 words a month for years on end without running out of steam? Well, you could dress like Dent in the photo and wear a gun around your hip, an adventurer's hat on your head, and put your hands on your hip and look real manly.

If that doesn't work, try reading "The Pulp Paper Master Fiction Plot." In the article, Lester Dent tells all and reveals his very own formula for writing fiction. The article was originally published in the 1936 Writer's Digest Yearbook and is available online courtesy of Atlus Press.

Here is how Dent describes his master design, which he claims is good for any story of 6000 words. According to him, "it has worked on adventure, detective, western and war-air. It tells exactly where to put everything. It shows definitely just what must happen in each successive thousand words."

While he describes the process in great detail in the article, I'm only quoting the outline of the design. For more info, be sure to read the whole article.

"FIRST 1500 WORDS.
1—FIRST LINE, or as near thereto as possible, introduce the hero and swat him with a fistful of trouble. Hint at a mystery, a menace or a problem to be solved—something the hero has to cope with.
2—The hero pitches in to cope with his fistful of trouble. (He tries to fathom the mystery, defeat the menace, or solve the problem.)
3—Introduce ALL the other characters as soon as possible. Bring them on in Action.
4—Hero’s endeavors land him in an actual physical conflict near the end of first 1500 words.
5—Near end of first 1500 words, there is a complete surprise twist in the plot development.

SECOND 1500 WORDS
1—Shovel more grief onto the hero.
2—Hero, being heroic, struggles, and his struggles lead up to:
3—Another physical conflict.
4—A surprising plot twist to end the 1500 words.

THIRD 1500 WORDS
1—Shovel the grief onto the hero, who continues to fight back, most heroically.
2—Hero makes some headway, and corners the villains or somebody in:
3—A physical conflict.
4—A surprising plot twist, in which the hero preferably gets it in the neck bad, to end the 1500 words.

FINAL 1500 WORDS
1—Shovel the difficulties more thickly upon the hero.
2—Get the hero almost buried in his troubles. (Figuratively, the villain has him prisoner and has him framed for a murder rap; the girl is presumably dead, everything is lost, and the DIFFERENT murder method is about to dispose of the suffering protagonist).
3—The hero extricates himself, using HIS OWN skill, training or brawn.
4—The mysteries remaining—one big one held over to this point will help grip interest—are cleared up in course of final conflict as hero takes the situation in hand.
5—Final twist, a big surprise. (This one can be the villain turning out to be the unexpected person, having the “treasure” a dud, etc.)
6—The snapper, the punch line, to end it."

Let me know if anyone has tried out Dent's method! (Or if you try dressing up like an adventurer next time you sit down to write.)
at May 02, 2010