Christos N. Gage’s Area 10, with art by Chris Samnee, is action-packed, gruesome, and an all-around damned entertaining read. The fifth graphic novel in DC Comic’s Vertigo Crime series, Area 10 fuses the noir archetype of the big city cop haunted by personal demons with the splatter and all-caps adjectives of comic artistry. Frequent sightings of words like “splosh,” “whirrrr,” “crash,” and “whramm” is a guarantee that you won’t be bored reading this, and that the characters in the book will most definitely endure some visually impressive bodily harm.

Adam Kamen is a detective for the NYPD who has never been quite the same since his wife suffered a miscarriage. While stopping a maniac killer, he wound up with a screwdriver through his head. Miraculously, he survived. The side effect, however, is anything but a blessing. Now, whenever Adam looks someone in the face, he sees their future—their impending deaths and, in some cases, their impending crimes. If that wasn’t bad enough, another mad killer is on the loose, leaving a trail of decapitated corpses around the city, and Adam’s co-workers suspect him for the rampage. Adam, meanwhile, suspects that hole in his head might be the key to the whole puzzle. 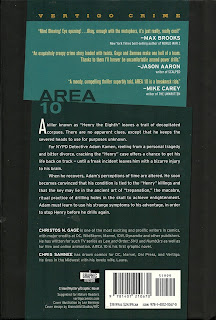 Area 10’s frenetic mélange of action, carnage, and surrealism reminds me of Duane Swierczynski’s Expiration Date. Think hardboiled noir meets macabre fantasy. Christos N. Gage has the gritty tension of the urban crime thriller down pat, while Chriss Samnee’s art captures the grisly, visual splendor of the story. The detailed depictions of “trepanation”—that is, the ritual of drilling holes through one’s head—are enough to make one squirm, and Adam’s subway battle against a villain who appears only as a blinding light has all the bigger-than-life excitement of superhero comics.

What I most like about the Vertigo Crime line of graphic novels is that they’re accessible to readers who aren’t familiar with graphic publications. They’re written in such a way to draw in crime fiction fans that might not be big comic readers. This was certainly the case with me. I would read comics on and off, but never devotedly. The four Vertigo Crime books that I’ve read—Area 10, The Chill, The Bronx Kill, and The Executor (my favorite)—have turned me on to this format, and I’ve already started looking into other graphic novels in the crime genre. Expect more coverage in the near future.
at May 12, 2010