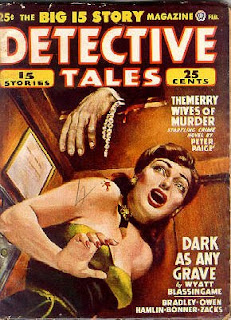 Talmage Powell got his start writing for the pulps during World War II. He was a regular in magazines like Dime Detective Magazine, The Shadow, Fifteen Western Tales, Ranch Romances, Manhunt…the list goes on. By 1959, according to Tennessee’s Kingsport News, Powell already had over 500 stories in print—and he still had almost forty years of publishing ahead of him. In 1959, Powell also moved into novels, publishing two paperback originals: The Smasher (part of an Ace Double) and The Killer is Mine (Pocket Books), which inaugurated his series Private Eye, Ed Rivers. For a while he lived in St. Petersburg, FL and was part of a circle of writers that included Harry Whittington, Day Keene, Gil Brewer, Jonathan Craig, and Robert Turner. Whittington even remarked of Powell’s stories that they were “inimitable.”

While much of Powell’s work is out of print, Vintage Library has brought back many of his short stories. Of the two collections I purchased, Detective Three-Pack #1 was superior. All three stories included were originally published in Detective Tales Magazine: a wife hires a shamus presumably to prove her husband’s innocence in “Black Widow” (Feb. 1949); an old flame asks a mob boss find the man who framed her husband in “I Bleed For You, Babe” (June 1944); and a private eye considers becoming a hired killer for a former lover in “Barracuda!” (Feb. 1948). 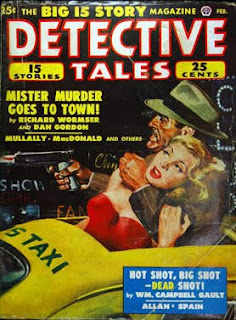 These stories show Powell at his best: the writing is punchy, the twists turn in your gut, and he brings a certain originality to seemingly formulaic story ideas. At six pages each, there’s no lag time in the narratives. There’s a spark to Powell’s protagonists, an element of latent surprise that catches you off guard. Sometimes the narrators turn out to be the guilty ones, and even when they’re not, it isn’t clear they are going to do “the right thing.” In other words—they ain’t heroes, and they certainly ain’t role models, but as characters they are undeniably compelling.

Take a look at this line from “Barracuda!”:

There’s an unease about the ending of these stories, a deliberate irresolution. Even when death occurs (as it often does), it is never the real ending to the story. Powell’s characters bear witness to suffering long after “The End” is scrawled across the page. Sometimes they are the cause of it, and sometimes they are the victim, but always they watch as pain perpetuates without any solutions in sight. 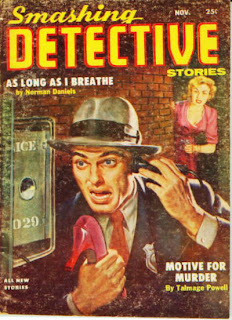 The other collection from Vintage Library I purchased, Mystery Three-Pack, was more of a mixed bag. Powell’s reoccurring motif of an ex-girlfriend reappearing is at the heart of “What Happened to Lisa” (5 Detective Novels, Winter 1953), a solid “missing person” mystery with a few good twists; “No Bodies, Darling” (Dime Detective Magazine, Feb. 1952) shows shades of Woolrich’s “Rear Window” but never comes even close; and “Motive For Murder” (Smashing Detective Stories, Nov. 1955)—the gem of the bunch—is a carny story about a stunt that goes deadly wrong that one might expect from Fredric Brown.

Several other collections are available from Vintage Library, and I’ve already purchased two more. I also have an Ace Double that includes Man-Killer (1960) that I hope to review soon.