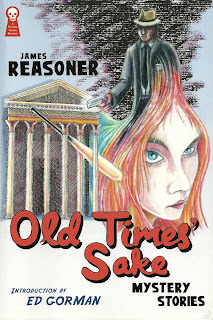 Old Times’ Sake (Ramble House, 2007) collects seventeen crime and mystery stories by James Reasoner published between 1977 and 2001. Some take place in shadowy cities after dark, a few in the disarming placidity of the suburbs, others out West, and even one in Ancient Rome. Whatever the settings, though, three things are for certain: the stories are gripping and original, never settling for obvious, easy-outs; the characters are dynamic and rich with nuance and personality, regardless of if they appear on only one page or on twenty; and the writing shows not only Reasoner’s superb command of short-form fiction, but also his deep knowledge and affection for the pulp lineage which he carries on.
Mike Shayne Mystery Magazine, the digest where most of these stories originally appeared, was never a “pulp” magazine proper, but it grew out of that tradition, and it is this spirit that Reasoner evokes but never merely mimics or parodies. There are private eyes, hit men, small town deputies, and mob thugs—but not as you remember them. As Nicholas Lake tells a client at the start of “Kemidov’s Treasure,” “But I don’t look like a private detective? Don’t worry, everyone says that. The world visualized private detectives as either sleazy little men in trenchcoats or Humphrey Bogart. I’m neither one.” He’s got a private jet, a panama hat, and a fondness for detective literature, but he’s also got scruples that can’t be bought, and a sense of dignity that seems to be rare in the worlds that Reasoner writes about. Scruples are something Lake clings to, and he doesn’t like it when others take advantage of them, especially clients. 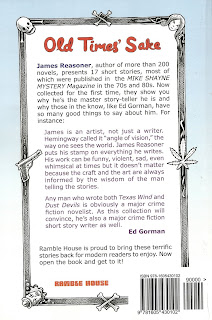 Dignity, and the betrayal of it, is a reoccurring theme in these stories. The title of the collection, Old Times’ Sake, seems to refer to more than just Reasoners’ roots as a writer, but also the simpler times that early pulps sometimes (but not always) portrayed. In “The $100,000 Collar,” the crooks are more honest than the businessmen and insurance companies. The bond between private detective Delaney and the old burglar is one of mutual respect: they’re both true to themselves and are always on the level. They are dying breeds in a duplicitous world. The masterful title story, “Old Times’ Sake,” in which the limits of a friendship are finally reached, ends with the haunting line, “Memories just won’t leave you alone.” It would be a fitting epitaph to many of the stories in this collection, a simple truth whose resonance belies the mere six words in the sentence.
Part of Reasoner’s skill is the way he can break out of the standard crime paradigms and explore other settings while still sustaining the suspense and excitement his stories are known for. “Down in the Valley” is a dramatic prism, showing a story about immigration across the Mexican border from several shifting perspectives. There is Ramon, the immigrant in the back of the truck; Flood, the driver of the truck; Dave and the other police officers who have set up the dragnet; and the anonymous organizers who engineered the operation and who have no regard for human life.
Other highlights include “Graveyard Shift,” about a convenient store clerk's bleak odyssey from midnight to midnight; “The Old College Try,” in which a student learns the unpleasant truth about what he is really capable of; and “A Matter of Perspective,” in which two henchmen’s gruesome job for their boss ends on an unexpectedly comic observation, a reminder that Reasoner’s knowing, world-wise smile is always just around the corner—or, in this case, waiting for you in the next paragraph.
A few favorite quotes:
“It wasn’t much of a living, but it was all I had.” –“Old Times’ Sake”
“Just once, Ron started to say to himself. Just once… And then he bitterly accepted the realization that just once would never come.” –“The Old College Try”
“I know too well the emotions that fill the long nights: boredom and fear. Boredom because nothing different ever happens, fear that sometime it might.” –“Graveyard Shift”
“Well, he had more money now, but the whiskey and the women still weren’t always that easy to come by.” “Down in the Valley”
“I couldn’t answer the question, so I didn’t pull the trigger.” –“A Matter of Perspective”
at April 25, 2010