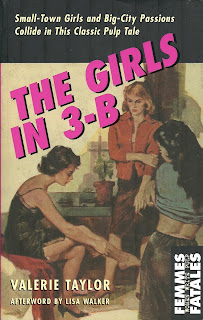 Annice, Barby, and Pat are The Girls in 3-B, three young women straight out of high school who leave their small home-town and move to Chicago. Sharing an apartment, they hope to find work and to escape their parents, their peers, and their past. In short—they want to grow up. While Gold Medal originally marketed Valerie Taylor’s novel in 1959 as lurid exploitation (three girls undressing on the cover was their obvious selling strategy), the book is actually a sincere and perceptive coming of age story that holds up quite well half a century later.

As Lisa Walker points out in her Afterward to the book (which was reprinted in 2003 by CUNY’s Feminist Press as part of their series “Femmes Fatales: Women Write Pulp”), Taylor’s ambitions are actually at odds with both the pervasive, conservative mores of the time, and even subverts the advertising politics of Gold Medal. Not all of the girls are as naïve as they seem—one of them is fleeing sexual abuse at home, while the others are not demonized for their own sexual awakenings—nor does Taylor give in to the promises of the cover art. Readers looking for licentious pleasures should look elsewhere. Taylor doesn’t put The Girls in 3-B on display for cheap thrills or voyeuristic fantasies. Instead, these three young women are struggling with economic independence and sexual identity in the era before Women’s Lib. There are certain concessions to the time period (which is to be expected) but, more importantly, the book questions the expectations demanded by 1950s America and shows that the young generation was challenging the norms. 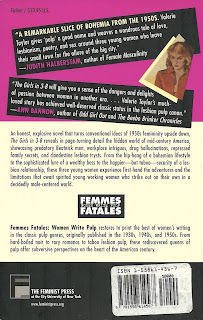 Valerie Taylor herself was a political activist her whole life and was involved with many civil rights and feminist organizations. At least one battle she won on the page was the positive portrayal of a lesbian couple, something that was not possible nine years earlier in Tereksa Torres’ Women’s Barracks (1950) or even seven years prior in Vin Packer’s Spring Fire (1952), both of which were also published by Gold Medal. Now that the book is back in print (with the same cover art, no less, though it is reversed), we can now appreciate The Girls in 3-B for strides forward that it, and its author, were able to achieve.

Here are some quotes from the book:

“The city spread for miles, vast and impersonal. A huge honeycomb of buildings intersected with streets, alleys, parks. A human body was nothing, a small fragile thing capable of being hidden in a sewer or a broom closet. Both of them their human helplessness, pitted against the uncaring monster that was Chicago.”

“The cold wind, blowing through her thin dress and forcing itself upon her abstraction, was like a knife. But she walked on, stumbling over cracks in the sidewalk, ignoring traffic when she came to a crossing, half-blind and wholly deaf with shock and anger.”
at April 17, 2010