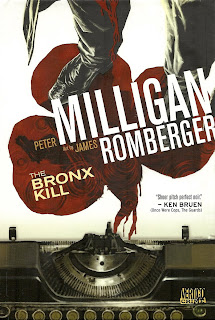 Vertigo Crime’s series of Graphic Mysteries continues with The Bronx Kill, a collaboration between acclaimed British comic book writer Peter Milligan and artist James Romberger. Playing off the double meaning of the word “kill,” the duo have found one of those perfect titles for a crime story—and they don’t waste it. They nail the New York atmosphere and populate the city with generations of closeted skeletons that refuse to stay locked away. Like the Bronx waterfront the title refers to, the characters in the story are damp with rot and decay, and whether or not they’re found floating in the river, they are, each in their own way, drowning.

Cops run in Martin’s family, a tradition he thinks he ends by becoming a writer. The past, however, doesn’t let go quite so easily, and Martin finds himself haunted by the mysterious death of his Great-Grandfather at the “Bronx Kill” across from Randall’s Island, as well as the disappearance of his own grandmother that left his father without a mother growing up. As Martin begins to explore these issues in his new book, his wife suddenly goes missing, and he finds himself the police’s number one suspect. As Martin searches for the strange man he saw outside his apartment window one night, he also begins to piece together the missing parts of his family’s history.

One of the things that interests me in crime-themed graphic storytelling is the way that language—so central to the identity of the crime genre—undergoes a transformation. The cross-currents of comics and crime fiction go way back: Spillane worked in comics (and the influence on the Mike Hammer novels is certainly clear in its hyper-stylization), as did Robert Leslie Bellem (whose Dan Turner stories was also a comic series for a while). While the syncopated, concise dialogue that characterizes hard-boiled fiction is perfectly suited to the comic format, the stylized narration (whether first- or third-person) is not necessarily. Instead, it is replaced by images that must convey the internalized vision of the characters, the lilt of their voices, and the thousand-and-one nuances that can be communicated by even the shortest paragraph. The noir paradigm must become almost completely visual—and thankfully, the evocative nature of the noir style lends itself naturally to pictorial storytelling. 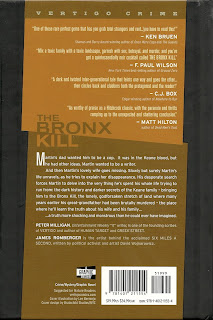 Except for the occasional “AHGHH!” or other non-verbal outbursts, Milligan’s prose is decidedly understated. Dialogue moves swiftly, never getting caught up in either exposition or excessive description. This is where the partnership with Romberger pays off. The lack of color gives his drawings a monochromatic elegance, like the foggy set of an old Hollywood B-picture. Considering the story’s preoccupation with death, disappearance, and the past, the colorless characters fittingly evoke phantoms and the specter of death, which is always hiding just behind the next page.

The most interesting aspect of The Bronx Kill is not just the story itself, but the way it is told. It is a meta-narrative that gives us glimpses of Martin’s text as he is writing it. (The story-within-a-story is similarly a story drenched in murder, history, and family trauma.) We are even privy to Martin’s edits—words crossed out, others added, and assorted other jottings ranging from his own insecurities and questions about the text to connections to his own family’s past. In marked opposition to Milligan’s restrained prose, Martin’s paragraphs are full of long-winded sentences and overwrought passages. However, as Martin explains to his editor at one point, “It’s a first draft. Written under extraordinary circumstances.” By revealing the process of writing, Milligan shows the way (or one way, at least) in which narrative is constructed— or, rather, the way in which a narrator (like Martin) tries to make sense of out details that confound, confuse, and obsess us.

This is the second book in the Vertigo Crime series that I’ve read (the other was Jason Starr and Mick Bertilorenzi’s The Chill), and I continue to be impressed with their work. I’m looking forward to reading their upcoming books The Executor by Jon Evans and Andrea Mutti and Area 10 by Christos N. Gage and Chris Samnee.

“It’s like all the pain just gets handed on and on, ain’t it?”