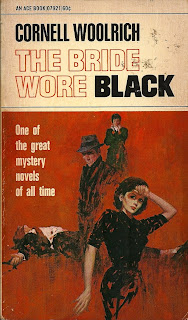 Cornell Woolrich’s The Bride Wore Black (originally published in 1940) is as swift and lean as the vengeful killer referenced in the title. Organizing the novel as methodically as the bride plans her payback, Woolrich titles the chapters after Julie Killeen’s intended victims, breaking each of them down into three separate movements: the establishing of Julie’s false identity; the murder itself; and the police’s post-mortem report. Both Woolrich and Julie strictly adhere to this systematic approach in order to introduce logic into an illogical world where chance and coincidence can deprive a bride of her groom on the steps of the chapel only moments after they said their vows.

For Julie, her mission is a way to make sense of the chaos, to discipline her emotional side in favor of rationality. By adapting Julie’s state of mind to his own prose, Woolrich tells us a lot more about Julie’s character than at first meets the eye. As readers, we are confronted with an abstract being whose psychology and emotional underpinnings are carefully concealed. Cold precision takes the place of any human characteristics. Each chapter brings a new role for Julie to play. Her shifting identities are the only thing we can cling to and, as the police make note, there is little consistency there. Lengthy periods of time lapse between chapters, of which we know nothing about. The only clues to her character are the cryptic, fleeting last words she says to her victims. Even the police can’t figure her out, and Woolrich seems reluctant to give us readers anything more to go on, as though to reveal too much about Julie would be to betray some trust between the author and his character. However, this ambiguity, and the steady but driving pace of her mission, is what makes Julie such a compelling character to follow. 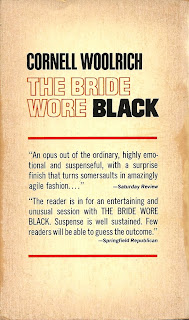 By reversing the typical noir paradigm and having the femme fatale be the main character, Woolrich not only makes us sympathize with a character who is often placed in the role of the villain, but he also creates a story in which there is no place for heroes. We turn the pages not with anticipation of dread or moral outrage, but with empathy. With two of the murders occurring in-between the lines, and several other ones rendered in sparest descriptions possible, Woolrich limits the morbid attractions of the narrative. The Bride Wore Black isn’t action packed or thrilling or even horrifying—instead, it is elegiac. It is filled with the same insatiable melancholy that characterizes much of Woolrich’s work—a bitter feeling that can’t be remedied. Even by the story’s end, there isn’t the satisfaction that wrongs have been righted, that any of the characters have gotten what they wanted or even what they deserved. The decided irresolution of Woolrich’s narratives is not only one of his most defining characteristics, but one of his chief contributions to noir. Nothing sums up the noir worldview better than, “All’s well that ends badly,” and in the works of Cornell Woolrich, that is just what you get.

In a Time Magazine profile, "That Old Feeling: Woolrich's World," Richard Corliss wrote that, “Even Woolrich’s fans complained about his novels’ impossible set-ups and implausible resolutions. They were like a cocktail party full of double martinis, or an night of wild illicit sex: it’s great while it’s going on, but in the morning you feel sick, confused or angry.” In a way Corliss is right. In the final chapter of The Bride Wore Black, Woolrich has no qualms about withholding crucial pieces of narrative information from the audience, or pulling the rug out from under them with frustrating coincidences. But that seems to be the point that Woolrich is making: in this (or, at least, his) screwed up world, things like this sometimes happen. You can’t plan them, and you can’t plan on them happening, either. Maybe his characters are the victims of some cosmic cruel joke; maybe they engineered their own downfalls; or maybe it is just bad luck. For the reader, there’s no pleasure in guessing the twist ending before you get there because Woolrich gives few (if any) hints. Woolrich is less concerned with the finale than he is the journey to get there—the black path of fear (to borrow another of his titles) that his characters must walk, and which we must accompany them on every step of the way.

And what a bleak, melancholic path it is.

A few quotes from the book:

“You don’t know what it means… You deal in arrests, to you it’s nothing. You can’t possibly know what goes through you, when you’re in your room, secure and contented and at peace with the world one minute, and the next someone suddenly comes for you to take you away. Takes you down through the building you live in, in front of everybody, takes you through the streets—and when they get you there you find out you’re supposed to have—to have murdered a man! Oh, I can’t stand it! I’m frightened of the whole world tonight.”

“It seldom pays to change trains in the middle of a trip—you’re liable to fall down between the two of them.”