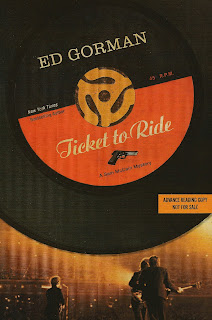 The eighth and final entry in Ed Gorman’s Sam McCain series, Ticket to Ride (Pegasus Books, 2009) finds the Iowan lawyer enmeshed in a web of local, national and international politics, all of which are converging right in the heart of Black River Falls. It’s 1965, different stances on the Vietnam War have divided the town, and the anti-war Sam McCain seems to have found himself on the unpopular side. Things start to heat up when Lou Bennett, whose son was killed in the war, crashes McCain’s anti-war rally and starts a fight with the charismatic young protester Harrison Doran. From there, things only get worse: Bennett is found dead the next day, and Doran is arrested under suspicion of murder. With the whole town convinced of Doran’s guilt, McCain begrudgingly agrees to defend Doran as a favor to a friend. Complicating things even further are McCain’s crush on Bennett’s daughter-in-law Wendy, and a skeleton in the family closet revels a web of secrets that Black River Falls would have preferred to keep buried and forgotten.

The reasons for Gorman’s reputation as a first-rate novelist are on full display in Ticket to Ride. As in The Midnight Room (released earlier this year and reviewed here), here he mixes suspenseful plotting with a humanistic sensibility that makes us sympathize with the characters, regardless of what moral/political side they are on, and what things (good or bad) they may have done. “Cliffie was supposed to be a cartoon,” our narrator says, “It pissed me off that he’d forced me to see him as a human being.” Character is one of Gorman’s strongest suits, and Ticket to Ride is brimming with lively characters, such as a Midwestern wannabe beach-bum surf rocker named Turk, and a pulp writer named Kenny (“One of Kenny’s best serious stories was called 'Grudge Humping on the Amazon.'”).

While the author’s sense of humor is more pronounced here than in The Midnight Room (McCain’s wry observations are an integral element of the narrative’s pacing), it would be a mistake to call this book merely “lighthearted.” As the book’s prologue illuminates, Gorman is investigating not just the murder of Lou Bennett, but also the larger cultural and political climate of the 1960s, which affected the small towns of America as much as they did the nation. It makes a fascinating comparison to our own times, in which much of the nation still remains divided on current political issues, and in which heated arguments and polarizing rhetoric can often muddle the possibility of constructive debate (as is the case in Ticket to Ride).

For all of its humor and cultural insight, for me Ticket to Ride is at its most effective when dealing with the emotions of its characters—wounded lovers trying to move on in their lives, and particularly McCain’s own struggle to come to terms with his father’s mortality and understand their own misunderstandings: “There were times I’d resented him…but these times were always forgotten in the respect I had for what he’d been through and the love I felt for all the patience and encouragement and love he’d given me. Hell, I’m sure there were times when he’d hated me.”

This may be the final Sam McCain book in the series, and while it happened to be my first, it most certainly won’t be my last.

And now for a few favorite quotes from the book:

“It was an afternoon of heat and lawn work and little kids cooling off with moms aiming hoses at them and teenage girls in bikinis sunning themselves on towels and hoping to put a fair number of men in mental hospitals.”

“But Molly’s fetching looks were misleading. She was like dating a character from an Ibsen play.”

“Turk had the looks and sneer of most teen idols. What he didn’t have was the talent. So he tried to compensate for it by mixing James Dean and Marlon Brando. We weren’t having a conversation. We were having Acting class 101.”

“I felt like an encyclopedia salesman who’d just been rejected for the sixteenth time that afternoon.”

“Decades of smoking, drinking, screwing, and being sick in various ways tattooed the air forever.”