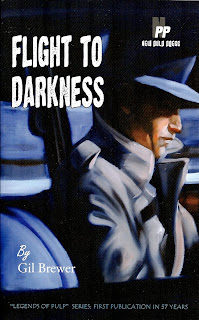 As its title proclaims loud and clear, Gil Brewer’s Flight to Darkness is a monument of pulp psychosis—a turbulent, never-ending nose-dive into the depths of one man’s paranoia that, to his utter and horrifying dismay, repeatedly comes true. Nightmares manifest in his real life almost as fast as he can think them up which, considering the degree of his mental trauma, means that things turn bad awful quick for Eric Garth. Originally published by Gold Medal in 1952, we can thank New Pulp Press for giving the book its first reappearance in fifty-seven years. This marks the first release of their “Legends of Pulp” series.

Flight to Darkness opens on Eric’s last day at a California sanitarium where he is being treated for post-traumatic stress disorder from his experiences during the Korean War. He dreads sleep because of a single, reoccurring dream in which he murders his wealthy half-brother, Frank, with a wooden mallet. His only consolation is Leda, a nurse who gives him plenty of close, personal attention. When Eric leaves the sanitarium, he drives off in a new car with Leda, his wife-to-be, in the passenger seat. She’s anxious to get married, but he doesn’t trust his sanity enough to commit just yet. En-route to Florida to reunite with his family, things literally turn south. Eric is suspected in a hit-and-run incident, and then his brother Frank shows up to re-institutionalize him. And then Leda stops visiting him at the hospital. Suspecting the worst, Eric plots his escape—only nothing can prepare him for the mess that awaits him back home. 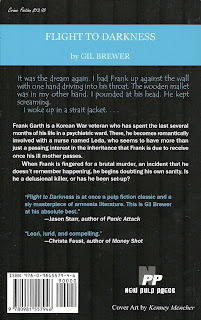 As in Brewer’s excellent 13 French Street, the main character’s increasingly manic, warped consciousness infects every aspect of the narrative. The first-person narration entraps us in his fragile worldview, which is always on the precipice of shattering. Just like the claustrophobic house in 13 French Street, the physical environments of Flight to Darkness are manifestations of Eric’s psychological states. The movement of the novel is from the sterile, falsely calm sanitarium to the wild backwoods of Florida, with raging rivers and shifting earth that crumbles under their feet because of the torrential rains (a perfect symbol of the characters’ own insecurities).

Communicating the mental distress of his characters is one of Gil Brewer’s strengths as a writer. Physically, the novel alternates between stasis and motion: confinement in hospitals, jails, and secluded cabs, contrasts to the larger action of driving across the country, breaking out of hospitals, and car chases deep into the woods. While the plot shifts between these two modes, the internal narrative of Eric’s mental state continually pushes forward at an erratic rate. Even in the moments of relative still, there is never calm: rising tension, but never release (until the climactic finale scene, that is).

So where does this “flight to darkness” take Eric? Nowhere, really. Geographically it takes him around the world (if we mark the start of his journey during the Korean War and the conclusion in Florida), but psychologically he realizes much of what he already knew and feared before. Even when he first meets Leda, Eric thinks to himself “There she was. My fate stood right there in the door…A fate that was going to be mixed up with death, murder, money, and hell.” He knows she wants money, and it is his brother that has the money; the doctors’ concerns for his own stability are proved right (aided by some scheming frame-ups); his brother’s criticisms of his uncontrollability and penchant for wasting money seem right-on; and he even throws away (at first) a loving relationship for a second chance at a knowingly dangerous fling with Leda. This actualization of one’s own self-doubts is a reoccurring theme not only in Gil Brewer’s work, but also of many of the pulp paperback originals of the era, and one of the defining characteristics of noir literature.

As one would expect with Gil Brewer, Flight to Darkness is filled with snappy dialogue, creative and vivid euphemisms, and striking phrases. Here are just a few of my favorites:

“I cursed her. She was a complete savage, bursting with passion, lustful, wanton, wild. At first it was like drinking hot red wine. Then the whole world shuddered and rocked, with the trees thick and mingled with her hair and the smell of it with the sunny shade, a dark blinding explosion.”

“The open door of the sedan swung gently, to and fro. Wild and with unseen tears in the sunny afternoon.”

“My chest felt as though it was in a vise with somebody slowly turning the handle so my breath came shorter and shorter until I might not be able to breathe at all.”

“It was wild crazy loving and she said things only I would ever hear and half-recall as we tumbled headlong and viciously up through the blackness into the star-studded night.”