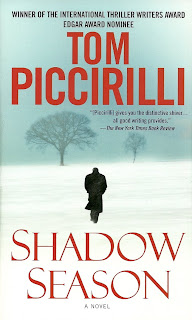 Is it that a book just happens to come along at the right time of your life, or do your own circumstances open up the text in distinctly personal ways? Tom Piccirilli’s Shadow Season was one of those books that I connected with from the very first line, and went on to read in a single afternoon. It’s an uncompromisingly dark story masterfully told that speaks well beyond its gripping scenario. As one character reflects on his own life, “It’s not much of a story. A common drama, an average tragedy just like everyone’s. When you boiled it down to the highlights you realized that you were where you were because you look a left turn instead of a right…” Piccarilli allows us to connect with the characters on a level that feels very private, perhaps all the more so because of the main protagonist’s blindness: together, we share in his darkness.

The most redolent description of Shadow Season comes from Piccirilli himself: “savage hopelessness.” It’s how he describes the atmosphere of a train ride to Sing Sing prison, but it is equally suggestive of the cold flames that slowly consume St. Valarian’s Academy for Girls and the small town of Three Rivers, NY one bleak wintry day. It is as though the uncomfortably familiar Cold Spot (the title of his excellent, Edgar-nominated novel published in 2008) had somehow become manifest and escaped the deep recesses of a character’s subconscious and taken root in reality: “it was a deeper and blacker place than he remembered, but the ice slid over his utter desolation, cooling him, forcing him to function.” 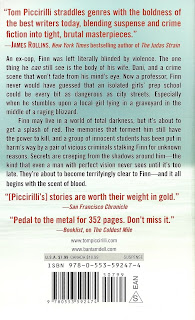 As snow falls and the temperature continues drops, the cast of characters in Shadow Season find themselves deep in the winter of their discontent. Finn is an ex-cop-turned-teacher unable to shake the anguish of a former case that resulted in the death of his wife, the permanent loss of his sight, and the incarceration of his former police partner. But even the isolation of the woods can’t provide a haven, as the amorous advances of a young female student have recently compromised his position with his boss, Judith, and his girlfriend, Roz. (That Roz used to be involved with his former partner doesn’t make things any less complicated.) A stroll through the cemetery destroys his already fragile sense of equilibrium as Finn comes across a battered young girl named Harley Moon who suggests that he is in danger, and then disappears as mysteriously as she first appeared. Finn thinks nothing of it, until Roz fails to return from an impulsive run to town. As the snowstorm worsens and school becomes cut off from the outside world, Finn begins to sense that they aren’t alone at the school anymore.

Piccirilli’s refined artistry as a writer, particularly his expressive phrasing and impeccable pacing, are on display throughout Shadow Season. Finn’s hyper-sensory perception as a result of his blindness seems to infect Piccirilli’s prose, which uses touch and temperature, sound and smell, to evoke the physical surroundings of the campus, and the increasing isolation of the hostile environment. Even Piccirilli’s decision to write in the present tense seems related to this overarching sense of “blindness”: everything is happening “now,” with no foresight into the future, and no assurance that everything will turn out all right in the end, if in fact there ever will be a finite “end” to any of this. This only adds to the highly cinematic quality of the narrative, with the bulk of it occurring on a single day with the occasional flashback to earlier times. 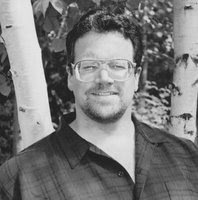 Much like Ed Gorman with his recent The Midnight Room, Piccirilli (who collaborated with Gorman on the book Cast in Dark Waters) isn’t interested in standard divisions of good and evil. As one character says, “In the movies the heroes are supposed to be more clever and outwit the bad lads…But I’m not clever, I’m a fookin’ idjit in most things.” It isn’t even that Piccirilli’s heroes show shades of villainy, or that his villains are sympathetic, because the narrative doesn’t rely on such dichotomies. Instead, human failure seems the operative motivation for all the characters, which brings to mind the famous quotation from Jean Renoir’s The Rules of the Game: “The awful thing about life is this: everyone has their reasons.” It is the search for these reasons that preoccupies Finn – not only about his partner’s corruption and his wife’s death, but also the mutual attraction with his student and the sudden appearance of Harley Moon and her brothers that seem to want something from Finn and falsely assume that he knows what it is they are after. As his past and present reveal themselves to be more connected than even Finn was aware of, the answers to his questions become at once more apparent and increasingly opaque.

Finn is dismayed to discover that, indeed, everyone does have their reasons, but that doesn’t give any more coherence or meaning to life. “You’ve got to wonder what any of it means. Maybe there will be revelations and understanding at the end, but probably not. You don’t always get the answers you need.” What Finn is after is control, not only over his own life, but the world around him. First as a police officer and then as a teacher, he sought to assert his own influence over others. Even his switch of locations from New York City to small town Three Rivers can be seen as an attempt to regulate his grasp on reality (literally and figuratively). In this light, “blindness” becomes emblematic of our own uncertainty and anxiety about where we have been, where we are now, and where we are going in the future.

Finn’s increasing disappointment with himself and his failures is highly relatable, and it is not just limited to his character. Were Piccarilli to tell the story from Judith’s perspective, we would see dissatisfied spouses and professional collapse; or from the point of view of Murph (the school’s custodian) we get a sense of unrequited ambition, the unsuccessful dreams of an Irish immigrant who comes to America and is as far away from his goals as ever. We only get hints of these parallel, unexplored narratives, but even this is enough to remind us that Finn is not alone in his condition – and Piccirilli and us are right there alongside him every faltering, uncertain step of the way.

“In a lifetime of mistakes, she’s only about halfway up the list, but she might be the one to finally bring me down.”

“Sometimes you play the role and sometimes the role plays you.”

“He falls to his knees as the past embraces, fondles, and murders him.”

“Anyone worth a damn has secrets.”

“Egos are delicate. Inconsequential achievements are sometimes the only ones you get.”

“His past wants him more than he wants it.”

“Even shadows want to survive between the moments when clouds pass overhead.”
at November 13, 2009