Anthony Boucher on Words and Writing 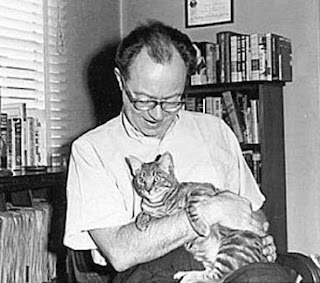 The politics of reviewing can be murky waters. For me this process is both an enjoyable creative act as well as a reflective one that helps me parse out my own thoughts on what it is I have read or watched. And while I don’t think one necessarily needs to be a novelist to write about novels, or a filmmaker to write about movies (as not every reader/audience member will have this background), it’s an issue that I always think about. (I do enjoy writing short stories and have a few in the works right now, but aside from small projects I would hardly call myself a filmmaker.)

Anthony Boucher was one of a kind, admired both for his critical and fictional writing. In his essay “You and the Reviews and the Reviewers,” he takes up the issue of what makes a good critic, and whether or not they should be active in the field they are writing about. Here’s an excerpt of what he had to say:

“Foremost a liking for mystery novels… Second, as thorough a knowledge as possible of what’s been done in the past… Further desiderata include some knowledge of literature in general…

“Should the reviewer also be a creative writer? That, my friends, is a tough one. Either way, the victim of an unfavorable review can make what seems a legitimate complaint. If the reviewer is not a writer, what does he know about the field? He’s probably soured and frustrated because he can’t sell, and takes out his spite on those who do. If he is a writer, he’s jealous of competition, he can understand only his own kind of story, and who’s he to talk anyway – look at his own stuff!

“Perhaps the ideal mystery reviewer is the man who knows the mystery novel detailedly and intimately, and yet can view it with the detachment of the scholar who has no desire to write fiction; but James Sandoes and Howard Haycraft are rare figures. It’s true, unfortunately, that the average noncreative reviewer of mysteries simply does not know enough about his subject…”

Email ThisBlogThis!Share to TwitterShare to FacebookShare to Pinterest
Labels: Anthony Boucher, On Words and Writing