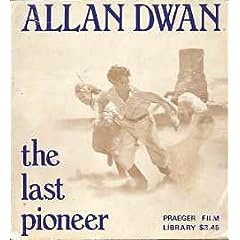 Those looking for a first-hand account of the early days of moving pictures can do no better than Peter Bogdanovich's Allan Dwan: The Last Pioneer (Praeger, 1971), an invaluable book-length interview with one of the true founding fathers of cinema. "There will never again be a movie career like Allan Dwan's," Bogdanovich begins his introduction. "Over fity years, he directed at least 400 pictures, and produced, wrote or supervised as many more." He entered the industry in 1909, directed his first movie in 1911, and made his last in 1961. It is no exaggeration to say that Dwan's history is cinema's history. He didn't just work in every genre and format – silents and talkies, black and white and color, shorts and features – he was at the forefront when they were still in their infancy. Regrettably, much of Dwan's work is lost – particularly his silent films, which is supposedly when he had the most artistic control over his own work. However, if The Iron Mask (1929) is any indication, than we are missing out on one of the foundational filmmakers.

What makes The Last Pioneer such a valuable and at the same time entertaining read is that it is about so much more than just the individual movies – it is about the evolution of the craft and industry. Dwan comically relates about his early days as a director, wearing a gunbelt on his hip – and having to use it a few times to defend himself against rival companies! Perhaps it is apocryphal, but it's how I like to think of those early filmmakers: in the desert, a camera by their side, a gun in their hands. An outlaw artist, working in a medium that was not yet respected, but that they saw promise in.
at August 07, 2009