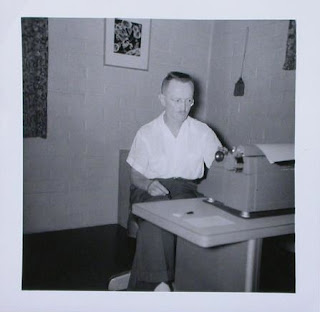 In her introduction to Fredric Brown’s Paradox Lost (Random House, 1973), Elizabeth Brown recalls her husband’s writing habits. Reading about writers’ habits can somehow humanize them, but while it demystifies the physical process, the creative one remains as elusive and unexplainable as ever. As a musician, I rather liked reading about Fredric Brown and his flute, as I always have a guitar and bass within arm’s reach of the computer. Strumming a few chords or playing bass often helps me get around any writing roadblocks.

So, here’s how Fredric Brown went about writing:

“Fred hated to write but loved having written.

“He would do everything he could think of to delay sitting at his typewriter; he would dust his desk, tootle on his flute, read a little, tootle some more. Or if we were living in a town where mail was not delivered, he would call for it at the post office, and then find someone to have a game, or two or three, of chess or pinochle or cribbage. By the time he got home he thought it was too late to get started. After this went on for days and his conscience began to hurt, he would actually sit at his typewriter. He might write a line or two, or he might write a few pages. But the books got written.

“He was not a prolific writer. His average day’s output was about three pages. Sometimes, if a book seemed to be writing itself, he would write six or seven pages a day, but this was unusual…”

Email ThisBlogThis!Share to TwitterShare to FacebookShare to Pinterest
Labels: Fredric Brown, On Words and Writing