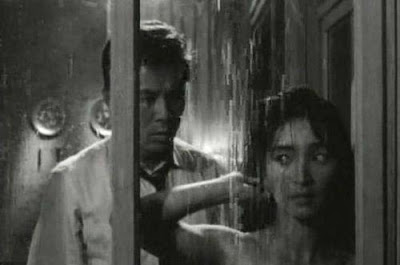 For Patti Abbott's "Friday's Forgotten Movies" I am writing about a South Korean thriller called The Housemaid (1960). Fans of Alfred Hitchcock or Henri-Georges Clouzot's Diabolique would really enjoy this one. You can watch it free legally on The Auteurs - it is a very good quality print, for the most part. This review was originally published in The L Magazine.

Recognized as one of the classics of South Korean cinema, Kim Ki-young's The Housemaid (1960) is finally making its long-awaited video release on two formats: a DVD from the Korean Federation of Film Archives, and online courtesy of The Auteurs (where it is, as of now, free to stream). Its psycho-sexual tension suggests some fusion of Henri-Georges Clouzot and Shohei Imamura, though Kim's meticulous mise-en-scene is far more claustrophobic, and his narrative goes far deeper into the recesses of his characters' neuroses. As soon as the movie starts, with music instructor Dong-sik (Kim Jin-kyu) discussing a recent case of one man's affair with his maid, it's as though the main character's private fears are projected outward, infesting his every gesture and every last inch of his home.

Life as Dong-sik knows it begins to fall apart when he hires the titular housemaid to assist his pregnant wife. While his wife and kids are away on vacation, he receives word that a former female pupil has killed herself over unrequited love for her music instructor. Dong-sik then finds himself in a compromising affair with the housemaid whom he has impregnated. Threatening to expose his infidelity, the housemaid holds the moral reputation of the family for ransom, awakening dormant murderous and sexual impulses of which everyone — even the children — are guilty.

Filming the story almost entirely in a cluttered, half-finished home, Kim Ki-young makes full use of narrow corridors and glass-paneled sliding doors to emphasize the sense of global paranoia that runs rampant throughout The Housemaid. Filming through chairs, banisters and windows, he turns the home into an inescapable prison of unrepressed passions. Once the skeletons come out of the closet with a vengeance in the film's second half, it is as though the outside world ceases to exist. This pulp-chamber drama reminds of something that Gil Brewer might have penned for that publisher of lurid poetics Gold Medal. In fact, both Brewer's 13 French Street (1951) and The Housemaid both share a common nightmare of corruption of the middle class home and the perversion of its moral system. What the male protagonists perceive as the threat of the femme fatale is actually the manifestation of their fantasies — murder and infidelity are but means of escape — and their ultimate horror is the realization of more than just their own complicity in their downfall, but that the devastation has widespread consequences. And though they were unable to admit it earlier, this is precisely what they wanted all along.

Posted by Cullen Gallagher at 12:34 AM