“The Flaw in the System” by Jim Thompson (Ellery Queen's Mystery Magazine, July 1956) 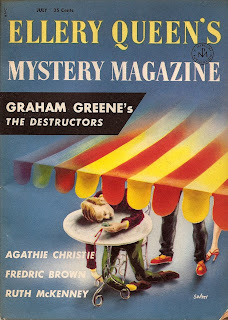 Con artists are nothing unusual in the world of Jim Thompson, but what is atypical about his short story “The Flaw in the System” (Ellery Queen's Mystery Magazine, July 1956) is that, instead of putting us in the shoes of the criminal, Thompson takes the point-of-view of the victims. Moreover, the victims – our narrator and his boss at the credit lending office – not only recognize they are being conned right from the get-go and allow it to happen, they also sympathize with the grifter. They also envy his nonconformity and freedom, a desire that characterizes many of Thompson’s protagonists, and in many cases causes their downfall.

When a nameless, faceless drifter wanders in and asks for credit with no job or collateral, the creditors know that he’s going to just run out on them and never repay the loan. Yet, for some reason, they are compelled to go against company policy and approve his application. It is this impulse, rather than the con, that preoccupies Thompson. For him, it is a heroic act – a mistake necessary to prove one’s humanity and individuality, and ultimately one’s own agency over their own thoughts and actions. In Thompson’s novels like The Killer Inside Me (or any number of his other books), these impulses become much darker, leading not towards the subversion of an inhuman organization but murder. Though even in this story one can feel Thompson’s trepidation towards the characters and their actions because even they recognize the dual implication of what they did. On one level it may prove they were human, but it also proved they weren’t in control of themselves. And that is something to worry about.

“Well,” I hesitated. “It was like I had to do it to prove something. That I was a person – a human being, not just part of a system. That there wasn’t any system big enough to keep me from doing the right thing. So – well, I guess that’s why I did it. Because it was the only way, it seemed, that this guy would go on liking me. And I was afraid that if he ever stopped liking me, I – I just wouldn’t be any more. I’d have moved off into a world I could never come back from.”

“The Flaw in the System” was also reprinted in Fireworks: The Lost Writings of Jim Thompson (Donald I. Fine, Inc., 1988), edited by Robert Polito and Michael McCauley.
at August 11, 2009