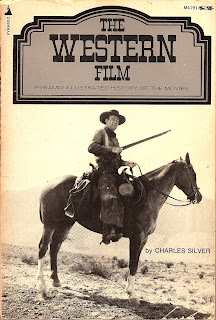 Charles Silver, who has been running the Museum of Modern Art’s Film Study Center and curating movies for over thirty years, is one of the foremost scholars and historians of Western cinema. Published in 1976, his volume The Western Film is a brief but educational and highly enjoyable journey through the development of the genre. Don’t let its length fool you – 140 pages might not seem like much, but Silver knows his movie history in-and-out and doesn’t waste words. Generously illustrated with stills, the book is enough to make you want to run out watch all of the many movies he writes about with fondness, affection, and insight.

One of the things I found most appealing about this book is that you get a real sense of what he is like, not only his tastes and sensibility, but also his values. Having had the pleasure of meeting Charles, I have to say he’s a truly generous man, someone who warmly talks about movies and enjoys discussing them openly and without pretension. He begins his book by stating his book is “highly selective and limited – a personal perspective on the subject which makes no claim to be complete or unprejudiced. I very much prefer what could be called the classical Western. I find little value or interest in those films which rebel against its traditions.” I appreciate his honestly about his tastes – it makes his discussion all the more lively. It also makes him more trustworthy; if he were to blindly extol the virtues of every Western bar none, then the book would not only lack personality, but his opinions would be far less credible. 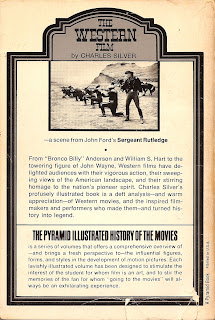 Being a fan of silent movies, I especially appreciated Silver calling attention to people like William S. Hart, Tom Mix, and movies like The Wind and Wild and Woolly (two of my all-time favorites). He’s also quite partial to John Wayne, and particularly the films he made with John Ford (like The Searchers) and Howard Hawks (Red River and Rio Bravo in particular). The back of the book also includes a list of all the films discussed, with their directions, writers, actors, studio and release date. It’s a heck of a list, one that I am still going through myself.

Though it is currently out of print, copies of The Western Film can be found online or at used bookshops for affordable prices. Whether you are new to genre (as I was when I first read the book) or a long-time fan, it’s a wonderful book to have as part of your library.

And speaking of Westerns, head over to The Tainted Archive, where Gary Dobbs has posted a terrific interview with writer Marcus Galloway.
at July 23, 2009