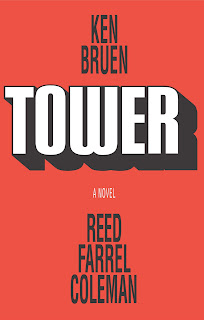 “Buddy, one way or another, the business we’re in, everything goes south.”

Nick and Todd grew up together on the streets of New York, and the way things are going for them, it looks like they might be fated to go down together as well. Low-level flunkies for a third-generation Irish-American gangster named Boyle, they do what they’re told without aspirations of getting anywhere in life. Eschewing the traditional motive of hubris, co-authors Ken Bruen and Reed Farrel Coleman use Tower (Busted Flush Press, 2009) to chart a very different sort of downfall, one that pays homage to the Angels With Dirty Wings archetype while taking its design of two friends diverged in a new direction at once modern, original, and extremely personal.

Bruen and Coleman have devised an inventive way to tell Nick and Todd’s stories as they begin to rise within the ranks, but ultimately fall from grace. I say “stories” because even though they are friends – inexorable even when alienated – they lead two separate lives, and suffer separately, as well. Both authors take turns narrating the same period in Nick and Todd's lives, retelling it from each of the characters’ perspectives and offering insight that the other friend remains unaware of. It is this tension of knowledge that not only creates tension between Nick and Todd, but also beckons the reader deeper and deeper into their descent. We think we know what’s going on, only to realize nothing is as simple as it seems.

Irish crime fiction maverick Ken Bruen tells the story of Nick, an Irish-American whose affection for his heritage stops at Guinness, while Brooklyn’s philosophizing flâneur Reed Farrel Coleman writes about the Todd, whose soul is half-hardboiled and half-romantic (though maybe those characteristics go hand-in-hand). What’s most remarkable about Tower is that not only do Bruen and Coleman perfectly compliment each other while retaining their own voices, but that their juxtaposition creates a literary polyphony that enriches the narrative all the more. It’s like a jam session between your favorite musicians, riffing off each other while still working together. They each get their solo, but one without the other wouldn’t be a song – together, it’s a tour de force. 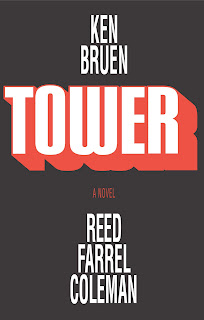 Whether you’re reading Bruen's The Guards or Coleman's Redemption Street, what you find in both writers’ work is a sincere love for language. With Tower, Bruen and Colemen take their linguistics to another level, making it a natural and integral part of both the narrative as well as the characters’ own lives. Whether it’s their incessant commentary on their boss’ phony Irish accent and tendency to quote from the Bible, Nick pointing out that he uses the phrase “in extremis, so you know I’m not just some thug,” or quoting songs like “Born Under a Bad Sign,” the characters are well aware that the language one uses is a signifier of who they are.

And that, more than anything else, is what the book is about – a search for identity. Who are Nick and Todd? Though they wouldn’t admit such an existential query in public – or even to each other – it is what is deeply troubling both of them. They identify themselves through the music they listen to, the alcohol they drink, the clothes they wear, the people they hang out with. Nick shows up at the bar in fancy clothes and orders a different drink, people are confused – this isn’t the Nick they know – while Todd is forever having conflicts over his choice in baseball team. And then there is the issue of cultural heritage – Nick has his Irish past (several generations removed) and Todd has his Jewish family, yet these too fail to give them a sense of being, an idea of who they are.

Language is at the core of Tower in another way, too: the root of Nick and Todd’s problems comes from the fact that they’re not communicating the way they used to. Neither confides in each other, and they keep their anxieties and problems to themselves. Both are aware that the words coming out of each other’s mouths are empty – a verbal façade that hides hollow, untrusting phrases – but neither realizes they guilty of committing the same thing. In this sense, the title Tower takes on new connotations: instead of just being Nick’s father’s place of employment (he’s a guard at the World Trade Center), it now references that Biblical symbol, The Tower of Babel. This pillar of confusion permeates the entire narrative: characters are never whom they seem, are constantly playing roles and donning masks, even in front of the ones they love. And nor are they always willing to admit their true feelings.

Relationships, whether platonic or amorous, are fraught with veiled gestures and obscured feelings. It is only fitting that the authors quote George Pelecanos’ Right as Rain at the start of one of the chapters: “He didn’t come here for answers. There were no answers. There was only sensation. No answers, and there would be no closure.” Tower is saturated with sensation, particularly descriptions of drinking and rage, as though they were somehow a surrogate for what Nick and Todd are really searching for. Answers as to who they really are, and where they belong.

One doesn’t have to look too far beneath the crime-laden plot of Tower to find its central concern about self-discovery, fraternity and family, because they’re right the from the beginning, and they continue to appear on every page until the very last one. It’s where the emotional drive and empathy come from; and it’s why the book most affects us so.

Bruen’s prose experiments and Coleman’s soul searching synthesize in a haunting, wholly satisfying experience. Tower is a book whose driving pace urges you to read faster and faster, yet slowing down one can really savor the craft these two authors have put into this book.

Tower will be released in September by Busted Flush Press. On the Busted Flush Blog right now there is a piece by Reed Farrel Coleman talking about the genesis of the project, as well as an interview with Ken Bruen. Be sure to check them out.

As always, a few passages from the book itself:

“It took a second then it burned, oh yeah, just the way you love it, like a sweet lady rubbing your belly, the belly of the beast…jeez, I’d had three… four?... serious drinks in the last hour and was beginning to feel them. I’d be needing them.”

“Women look for love. Men look for pussy and stumble onto love. And Christ, when we stumble it’s an endless fall.”

“Rage got me high as I’d ever been. It was coke and crystal meth cooked until it turned black and thick as breakfast syrup. Excuse me, waiter, can I have some rage for my pancakes?”

“It’s hard to lose yourself when you don’t know who the fuck you are to begin with.”

“Death and me, we were no longer going to stare at each other from across the dance floor. Once you feel loss, you always feel it.”

“Change is something I never dwelt on. Now it dwells on me.”

“Sometimes you won’t find justice anywhere in the world but in the dictionary.”
at July 23, 2009