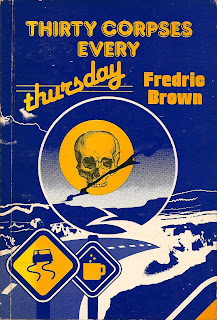 The last time I wrote about Fredric Brown, Gordon Harries pointed out that it wasn’t a kick that I was on – it was a bender. Here I am again, a couple months later, writing about another collection of Brown’s short stories. This one is Thirty Corpses Every Thursday: Fredric Brown in the Detective Pulps Vol. 6, published by Dennis McMillan in 1986. It collects eight of Brown’s inimitable tales, all written between 1940 and 1943.

What makes this edition so special – apart from Brown’s inimitable, wonderful, and offbeat stories (he was not only prolific, but also consistent with the high quality of his stories, which is very good news for fans of his) – is that William Campbell Gault wrote the introduction. Himself a pulp maestro, he was both a colleague and friend of Brown’s. Gault eschews the typical laudatory introduction and instead contextualizes what it meant to be a burgeoning/struggling writer for the pulps at that time, like writing for fly-by-night sex magazines when nothing else was available. “I think the dirtiest word we used was ‘curvaceous.’ They bought longer stories than the syndicates and paid the exorbitant price of one third of a cent a word for them.”

Gault also describes a writer’s community in which they all looked out for each other. They helped get agents, or to get manuscripts in people’s hands; they gave rides when someone needed them; and they played golf for small stakes when they weren’t writing – which wasn’t often, as they were always pounding the keys. “It was a better time, those days, depression and war notwithstanding. We wrote and they bought. We wrote fast; they bought cheaply. But they bought. They didn’t assume it would make them rich; all they asked for was reasonable returns and reader interest.” 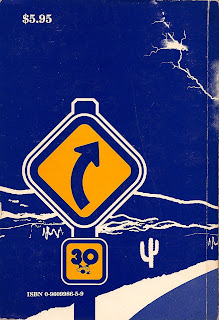 Ending on note at once somber and optimistic, Gault comments on the changing reception to pulp literature over the years. “It would be comfortable to think that the garbage that leads the best seller lists is a new trend in America. It isn’t. Check your old World Almanacs to confirm that. The best sellers of those years are no longer being reprinted; many pulp writers are. Do we have to die to be appreciated? It doesn’t matter. We are doing what we want to do and getting paid for it. There is no higher reward than that.”

As sincere as I think Gault is, there’s something hidden in that last remark, a secret anxiety that plagues all writers. The fear of being forgotten, or not being read – or not being able to be read. There’s a dual responsibility between readers and publishers to help keep literature alive. Readers must remember, and they must recommend – which is why Patti Abbott’s “Friday's Forgotten Books” initiative is so crucial. But, the work must be kept in circulation, and that’s not always the case. This edition of Brown’s short stories, as with all of his volumes in the McMillan line, has been out of print for about twenty years. Luckily, this volume was released in paperback, and for around thirty bucks you can still pick up used copies. Other volumes appeared only in hardcover, and those are far more expensive, and much harder to come by. Some are available through interlibrary loan – otherwise, we are left to pass along our copies to friends, to share what we have collected and what we love. Ultimately, this is one of the responsibilities of readers, writers, fans, critics – no one is exempt. You read the book, and you like it, then share why it is you value it. The more you share, the more you ensure that the book’s life will be sustained.

On that note, here’s a listing of the stories included in the collection, their original bibliographic information, and a quote and brief synopsis for each. The best story, in my opinion, is not the title story, but “A Matter of Death.” It shows Brown’s experimental side, as he alternates seamlessly between the point of view of the murderer, the victim, and the oblivious patrol officer on duty that night. As a literary device it not only heightens the suspense for the reader, but also forces us to connect to all three characters in different ways. Our experience with the story is not only much richer, but also darker (our sympathy is not so simple or straightforward) and funnier (as omnipotent readers, we see all the confusion that the characters aren’t fully aware of).

On with the quotes!

“Murder Draws a Crowd” (Detective Fiction Weekly, July 27, 1940)
“In the heart of the crowd across the street, a woman screamed. It was a scream of sheer horror.”
A series of mysterious ads draws large crowds to the Herald-News Building, and in the midst of the hubbub a murder is committed. Yet no witnesses can be found.

“I’ll See You at Midnight” (Clues, November 1942)
“I took a drink of the coffee, dark, black, and unsweetened. It burned like hell going down. But there were other things inside me that burned worse.”
Larry Bonnert lost his job, his wife, and his self-respect when he failed to put the gangster Dixie Wilman behind bars. Now he has a chance to get it all back, but the price is steep: risking his own life to put a bullet in Dixie right in front of his gang.

“Death’s Dark Angel” (Thrilling Detective, May 1943)
“Maybe it was just as well that didn’t know what he was headed for, that evening.”
Walter Hanson shows up to his bookie to collect on a one dollar bet and winds up with a couple of gangsters thinking he committed murder and stole their ten-thousand dollars.

“Thirty Corpses Every Thursday” (Detective Tales, December 1941)
“I started to thinking back and I felt lower than a mole’s instep.”
Two of the last three busses to Phoenix have gone off-road, killing all thirty passengers. Bill knows it can’t be coincidence but can’t prove otherwise, so reluctantly he gets behind the wheel for the midnight road, ready for anything…

“A Matter of Death” (Thrilling Detective, November 1944)
“He surprised me by falling out of the closet with a thud that seemed to shake the whole hotel. He was dead as a salted mackerel, and he hadn’t got into that closet and died of heart failure waiting for me.”
Getting off the bus in Cincinnati for a quick beer turns out to be a bad idea for Jack, because soon there’s a corpse in his hotel room, and a warrant out for his arrest.

“A Fine Night For Murder” (Detective Tales, November 1942)
“To hell with the kid, let him die. Mary’s and Delaney’s kid, and the hell with it.”
A bored police officer patrols the seemingly boring streets while unbeknownst to him a deadly reunion is shaping up when an ex-boyfriend just out of jail comes to town looking for revenge.

“Satan’s Search Warrant” (10-Story Detective, September 1942)
"Big Ben Hayden woke up, not screaming, but wanting to scream. Two ghouls, each taller than a house, had been fighting each other to decide which of them would eat Ben for an hors d’oeurve…”
Police officer Ben Hayden resents being woken up to go back to work. Even more he resents having to walk through the rain to investigate an accidental death. And then he realizes it’s murder, and that he’s at the wrong end of several guns. Now he really wishes he didn’t pick up that phone.

“Death Insurance Payment” (Ten Detective Aces, October 1943)
“And if the man on the floor of the closet was Larkin, it was quite obvious why he had not straightened the kitchen or fixed the furnace. He was dead, quite dead.”
Henry Smith shows up to a house to sell life insurance and winds up with two dead bodies on his hands – and three new customers. Too bad they’re also the only suspects.