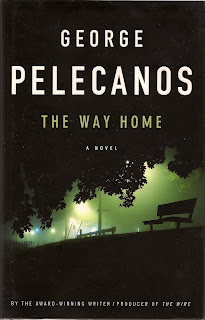 The Way Home is a deceptively simple title that offers false promises of hope and salvation. Home is where the heart is, right? Not anymore. In his latest book, George Pelecanos is out to show that the old mythology of “home sweet home” doesn’t have a place in the modern world. Broken, bitter families go beyond racial and class divides, unifying a diverse population with a deep-rooted sense of displacement.

Chris Flynn came from what statistics would call a “good family” – his parents aren’t divorced, they own their house, his father runs his own business, and there’s enough money for no one to worry. Yet superficial wealth hides the resentment and dissatisfaction that lies just beneath the surface. After a drug-fueled night of fights and car chases, Chris’ lifestyle finally catches up with him, and he winds up in a correctional facility for teens. But inside the walls of prison, Chris and his fellow inmates don’t find rehabilitation – just a microcosm of the problems they faced out in the real world: ignorance, intolerance, violence, and hopelessness.

Years later, Chris is out and working for his father. His friends from juvenile prison are out, and some of them are trying to turn their lives around: Ben is working with Chris laying carpets, and Ali is a social worker trying to get kids off the streets. But try as they might to avoid trouble, trouble finds them. While on a job, Chris and Ben uncover a bag of stolen money, but not wanting to implicate themselves in any crime they leave it alone. Only Ben happens to mention the money to a friend from prison who can’t say no to free cash. And soon enough, the owners of the money come looking for their stash, and when they can’t find it, there’s hell to pay – and they go calling on Chris.

There’s a haunting ambiguity to the title that becomes all the more apparent as the story progresses. “Home” may be their destination, but what exactly is “the way”? There are no promises of safety and security, or even the assurance of reaching their destination, wherever it may be. And what is the “home” each of the characters are looking for? Whether middle-class rancor or poverty, these characters were unable to find sanctity or support at home, only closed doors and closed minds, and a seemingly inescapable future already written for them. Or, perhaps, is “home” a reference to the prison that so many return to time and time again? The ominous undertones of the title only grow as the characters veer further and further away from the “right” path that society demands of them, yet which it refuses to allow them to follow.

Like the birds who eat the bread crumbs left behind in fairy tales, it is society-at-large that obscures the paths of the characters – whether they travel forwards or backwards – by limiting their options, by not providing jobs, and by passing judgment on their pasts. One of Pelecanos’ biggest concerns in The Way Home is the hypocrisy of a culture that insists that people pay for their crimes yet doesn’t always accept their penance. Pelecanos wants change – he doesn’t drag readers through the prison systems and through the unforgiving streets of D.C. for the fun of it, but in order to call attention to real problems. In the “acknowledgements” section, Pelecanos makes reference to The Sentencing Project (a group dedicated to the “research and advocacy for reform), but he also works this strain of activism into the story itself. The character of Ali, in particular, seems to be an earnest voice of hope in the novel, someone who vocalizes not only the need for reform, but also the difficulty of achieving and real change both with the system and with the kids themselves.

The Way Home is not an escapist novel. Pelecanos’ unique expression of realist crime fiction is rooted in our everyday world, in the anxieties we experience on our way to work, and the worries we carry on our backs as we head home at the end of the day. In addition to offering a perceptive window on contemporary life, what Pelecanos provides is sympathy for struggle, and a sincere belief in the future. For all its downtrodden characters and all the dead ends they encounter, The Way Home remains a hopeful book. When all is said and done, the “home” the characters return to promises to be a better place than the one they originally left behind.

And now for a few quotes from the novel:

“She laced her fingers together, rested her hands on the table, and bowed her head. Chris and Thomas Flynn dutifully did the same. But they did not speak to God, and their thoughts were not spiritual or pure.”

“I’m just disappointed, thought Flynn. That’s all it is. I’ve been a failure as a father, and there’s nothing ahead of me that looks promising or new.”

“I kinda figured out what you’re doing. What they call the formula. You’re getting kids all jacked up on one hundred and eighty pages of violence and disrespect, and then you add ten pages of redemption in the end that they not even gonna read. What I’d like to see is a whole book about a kid who doesn’t do any wrong at all. Who stays on the straight even though he may be living in a bad environment, because that’s the right thing to do. Because he knows the consequences of being wrong.”

“In his apartment, Chris sat in the dark and drank another beer. He had been thinking on something the little man with the thick mustache had said. As the pieces began to connect in his head, murder came to his heart.”
at June 15, 2009