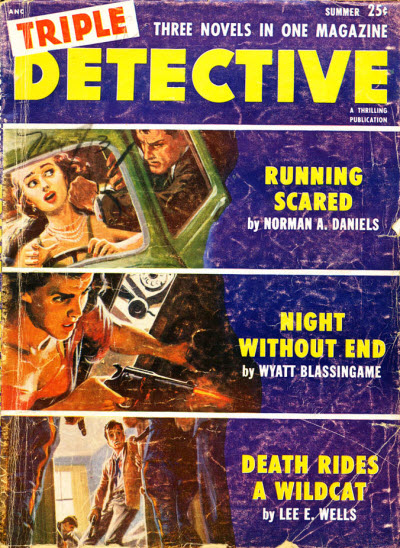 Since reading H.A. DeRosso’s bleak Western .44, I’ve been on the hunt for more of his writing. Recently I came across his story “Hide-Away,” which was published in the Summer 1954 issue of Triple Detective. Much like .44, “Hide-Away” is fueled by a disenchantment with the way of the gun, but instead of a contract killer, the protagonist is a Private Detective hired to track down a former employee of his who ran away with a young girl who he was supposed to find and bring home.

A sense of self-hate and utter regret runs deep throughout the story, and often moments of action are preceded with introspective bits like this: “Reluctance clogged Carson’s throat. He had never done anything he disliked more than what he was doing now.” By the end, even the hero doesn’t feel so heroic anymore, and he’s not sure which is worse: that he destroyed a vision of happiness, or the discovery that such bliss was only built on lies and violence. For this detective, tomorrow promises only another day, another case, and with no salvation in sight.

Here’s a sample of the story:

His eyes glared at Carson. “You’re leaving her alone, Will.”

Carson’s voice hardened. “You know me better than that. Art. You worked for me long enough to know that when I take on a job I finish it.”

“This is one job you won’t finish,” said Hunt, reaching for his hip pocket.