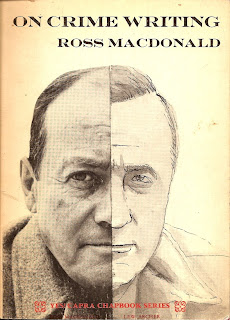 Reflections on writing aren't always as insightful or helpful as we’d like them to be – except when it’s Ross Macdonald/Kenneth Millar doling out the wisdom. Released as a chapbook by Yes! and Capra presses in July 1973, On Crime Writing is a priceless glimpse into the mind of one of crime fiction’s legendary writers. Macdonald divides the book into two sections: “The Writer as Detective Hero” analyzes the genre from Poe to Doyle, and then makes the leap to Hammett and Chandler – undeniably four of the most foundational authors of the genre; and “Writing the Galton Case” is a look at the mind of a writer as he struggles through drafts and his memory to put together a coherent novel.

There’s a stupefying clarity and originality to Macdonald’s prose. Even when writing about four of the most-written-about writers of crime fiction, he never feels like he’s re-treading old ground or rehashing accepted truisms. He dissects Chandler and puts him back together again like few other critics ever have, and his praises and criticisms are equally discerning. And as far as his own writing, he doesn’t shy away from his own problems, or the many dead ends he encountered in trying to put together a character or story. “Inspirational” would be the wrong word to describe this book, as though it contained some sort of “magical spirit.” Instead, it’s a book of experience by one of the most qualified in the field. And that is something far, far more valuable.

And now for some of Macdonald’s wisdom:

“The nightmare can’t be explained away, and persists in the teeth of reason. An unstable balance between reason and more primitive human qualities is characteristic of the detective story. For both writer and reader it is an imaginative arena where such conflicts can be worked out safely, under artistic controls.”

“At the roaring heart of Chandler’s maze there is a horror which even at the end of his least evasive novel remains unspeakable.”

“Chandler described a good plot as one that made for good scenes, as if the parts were greater than the whole. I see plot as a vehicle of meaning. It should be as complex as contemporary life, but balanced enough to say true things about it.”

“The character holding the pen has to wrestle and conspire with the one taking shape on paper, extracting a vision of the self from internal darkness – a self dying into fiction as it comes to birth.”

“The plans for a detective novel in the making are less like blueprints than like travel notes set down as you once revisited a city. The city had changed since you saw it last. It keeps changing around you. Some of the people you knew there have changed their names. Some of them wear disguises.”