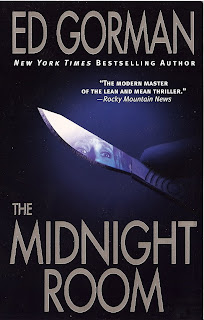 “Some things could be funny and sad at the same time. And this was one of them.”

It’s a fitting quote for a novel that expertly balances its grisly subject matter with storytelling so skillfully crafted and innovative that one can’t deny the sheer pleasure of reading such an accomplished wordsmith as Ed Gorman. Well-respected by writers and readers alike, Gorman’s latest novel, The Midnight Room (Leisure Books, 2009), exemplifies why he is one of the leading names in contemporary crime fiction.

As the novel opens, a mother is celebrating her daughter’s birthday without her. She’s been missing three months. But when a mysterious package arrives in the mail, the mother knows she can finally stop worrying, because all her worst nightmares have just come true. In the package is her daughter’s skull. Putting a twist on the seemingly stale “serial killer” plot, Gorman throws the reader for a loop by divulging the identity of the murderer early on and introducing a new element to the standard plot: an unnamed burglar who discovers a DVD of the murder while looting the killer’s safe. The question now isn’t just who will be next and how long will it take for the killer to be caught – but who is this person that now shares the secret, and how long will they remain complicit in crimes of the past, as well as those yet to come?

From here, Gorman delves into the troubled relationship between two brothers on the police force, Michael and Steve Scanlon, whose elderly father was a legendary officer before them. Sibling rivalry and the stress of their failing relationships with their respective wives and girlfriends come to a boil just as news hits the streets of another girl’s disappearance, and the two brothers find themselves caught at the center of an investigation that offers no clues and has the public in a city-wide panic. 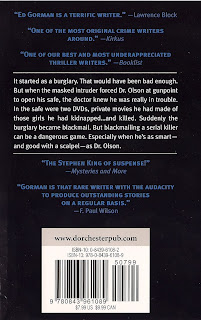 While Gorman calls this “my own version of the Gold Medal novel” and dedicates it to Peter Rabe, Stephen Marlowe, William Campbell Gault, and Robert Colby, The Midnight Room is anything but a pastiche. It's as lean, mean, and entertaining as any of the old Gold Medals, but it’s also just as brutal and unforgiving of its characters – particularly of its three primary protagonists, police officers Kim Pierce and Michael and Steve Scanlon.

By divulging the identity of the killer before we are even introduced to the officers, Gorman places us in an ironic position of power and authority because, essentially, we’re powerless to do anything with our knowledge. Unlike a traditional police procedural in which we follow along with the cops as they accumulate clues, solve the case, and restore order to a chaotic world, most of The Midnight Room is spent with the police unable to draw conclusions and unable to assert any sense of control on the world around them. This innovative structure of the novel not only reinforces the vulnerability and human limitations of the central protagonists, but also undermines the reader’s sense of security. Victims and predators alike could be anyone around us, and those that we lean on for help – whether it is family, friend, or police – are often just as helpless as us.

Gorman never underestimates his readers. He understands that they know the archetypes in and out, and can hear a false note from a mile away. To Gorman’s great credit, there’s nothing phony about The Midnight Room, neither his writing nor his characters. They are created out of tough love – no one is overly valorized in this morally ambiguous and unjust world in which darkness often gets the better of them. There’s something haunting about the characters’ overwhelming sense of regret, and their inability to enact change either in their own life or in others. Often they recognize the root of their own problems and its sometimes-devastating effect on others – yet their actions have an irreparable gravity to them. Some things just can’t be easily fixed, not even in a book.

Here are a few samples of Gorman’s exceptional prose:

“Big deal she was a cop with a gun and badge. She was just as helpless as anybody else. She’d felt guilty about it for years after.”

“His only conclusion was that there was no conclusion to be drawn, no real explanation. He realized that all this profiling the FBI did was little more than a way of calming nerves. If you could identify a cause then maybe it wasn’t so terrifying. But Olson knew better. He was death waiting to light on someone.”

“His life had made wonderful sense. His impending death made no sense at all. But then death never did. Michael leaned down and kissed his father on his freckled bald head.”

“She knew there was nothing left to say. Despite the heat she felt chilled now, chilled and alone under the vast starry sky.”
at June 08, 2009