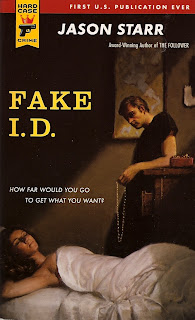 Beyond the alienated, sociopathic Private Eyes and infectious Femme Fatales, there are several other reoccurring character types that are equally symbolic of the brooding, desperate sensibility of noir. Of course there are those Average Joes and Janes that are thrown into the belly of the criminal underworld whom Cornell Woolrich loved to write about. Goodis’ Dark Passage also fits this mold, with a protagonist who, in order to prove his innocence, must first become guilty himself. Then there are the losers who can’t get out from behind the eight-ball: whether on the straight and narrow or walking the crooked path, they are perpetually doomed. Charles Willeford’s Pick-Up and Richard Hallas’ You Play the Black and the Red Comes Up focus on characters like this. Then you have the psychopathic narrators of Jim Thompson, who drag you into their warped perceptions and nefarious desires.

It is these last two types that Jason Starr merges in Fake I.D., originally published in the UK by No Exit Press in 2000 and released for the first time in the US by Hard Case Crime in 2009. Tommy Russo is the bouncer of a small New York bar whose main kicks are occasional one-night stands with girls he meets at the bar and even less frequent wins at the track. A wannabe actor, even his agent has given up hope for him. Tommy gets a discount on his closet-sized studio apartment by working as the super, but even still he can barely make rent, what with the gambling debts and losses piling up like a mountain of garbage. He used to be able to count on his boss for advances on his salary, but not anymore.

Things aren’t exactly looking up for Tommy when the smelly Pete from Yonkers knocks on his car window one morning at the track. He and some buddies are pooling money to buy their own racehorse, and they need one more guy. After thinking it over, Pete decides he wants in. The problem? He needs $10,000. The solution? Rob the safe at his bar, which is overflowing with Super Bowl bets. But with his bad luck, Tommy’s dreams have little chance of coming true. 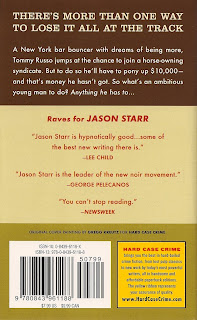 Fake I.D. unfolds like a slowly burning cigarette forgotten at the end of the night: when the ashes finally consume everything that remains, even they too must fall to the floor and disintegrate into nothingness. Like some gutter-Sisyphus, Tommy’s life is a cycle that goes nowhere, just from his apartment to the track to the bar and back to his apartment, where it all starts again. Starr contrasts Russo’s chronically dismal existence with his pipedreams of acting fame and horse-race winnings. An incurable dreamer, Russo’s fantasies are corrupted only by his desperation. The more he loses, the less he wants. It gets so bad that even a role in a dog food commercial seems like the first step through heaven’s gates.

Debased desires are just the first sign of his psychological breakdown. Much like the murderous sheriffs in Jim Thompson’s The Killer Inside Me or Pop. 1280 whose overly rational thought processes belie their growing instability, Russo’s plans become increasingly rash and half-baked. But to see it through his eyes, he’s in control of the entire world and nothing could ever grow wrong. More than an actor, Russo becomes an author who, just like Thompson’s sheriffs, sets into motion his own master-narrative, which casts him as the supreme winner. He sets up convenient frames for the police, performs a grand snow job on his boss, and whitewashes himself of his own guilt.

One of the underlying questions of noir literature is whether the world is really against the protagonist, or is perhaps they bring it upon themselves. Often, as in Gil Brewer’s 13 French Street, the answer lies somewhere in between: the main character knowingly enters a situation in which he will face temptation, but that doesn’t mean he’ll admit it to himself. This same subconscious desire for destruction fuels Tommy Russo, whose life – all things considered – isn’t too bad at all. He meets a great girl, one who even loans him $100 when he asks, and all he can think to do is rob her in her sleep and run away. At the racetrack, he may pretend he’s buying a ticket to win, but in reality he’s knowingly buying a ticket to lose. And in his more clearheaded moments, he’ll even admit as much. He knows there’s a racket and that the house always wins, yet somehow he thinks he can beat the system and come out on top. He thinks that he can get out from behind the giant eight-ball of life that is always in the way.

Quintessential noir to the extreme, Fake I.D. shows that the thematic underpinnings of classic authors such as Thompson and Goodis are just as relevant to today’s world as they were fifty years ago. People still dream, people still fail. Some get up and try again. And some, like Tommy Russo, just keep digging themselves an even deeper grave.

Hard Case Crime has generously posted the first chapter online, but here are a few of my favorite quotes from the novel.

“I guess it was the story of my life – when I had a good thing going I always found a way to screw it up.”

“I was so hungry I think I might’ve sucked in some bacon strips through my nose.”

“I gave him another solid right in the gut, then I walked out, taking a handful of French fries out of the rack on my way out.”

“I’m codependent. I like to be with sick, fucked-up women because I’m sick and fucked up myself.”