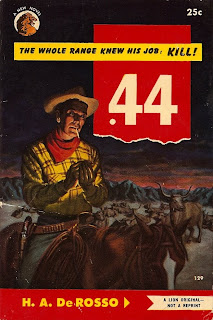 The roving gunfighter is an integral part of Western mythology. The mysterious stranger – a gun belt hung low on the hip – the quick draw and even faster trigger finger. What’s particularly interesting about this archetype is that it can apply to both heroes and villains. Like a doppelganger, the roving gunfighter is both the solution and the problem. Think about the ending of Shane: his coming to town is mirrored by the arrival of another hired gun, and at the end of the story Shane, the victor, knows he must be moving on. He’s a killer with a conscience, but – as his nagging conscience always reminds – he is still a killer. It’s a part of him that can’t be denied, reckoned with, or erased. A man with a gun is forever a man with a gun.

It is this irresolvable duality that haunts the protagonist of H.A. DeRosso’s noir-tinged Western .44 (Lion Books #129, 1953). Dan Harland never asked for the reputation of a feared gunfighter when he signed on as a ranch hand, but a feud between two rival ranches changed all of that. When a hotheaded employee of the competition challenged him to a dual, he had to defend himself. Little did he realize winning would change his life forever. From across the country, young up-and-coming shooters tracked him down and wanted a challenge. One by one, he killed them all – but always in self-defense, he always reminded himself.

But unable to shake the reputation, he takes his first job as a hired killer. When he meets up with his victim, Harland picks a square fight. Only this time, the other fellow draws first – but he doesn’t fire. Harland does, and that’s when he realizes, for the first time, that he has killed in cold blood. Haunted by this realization, Harland demands to know why his victim wouldn’t shoot, but the man dies before he can say anything. Determined to find out who this man was, and who wanted him dead, Harland heads to the deceased’s home and uncovers a dense web of deceit, infidelity, and murder that all centers around missing money from a bank job totaling one hundred thousand dollars. 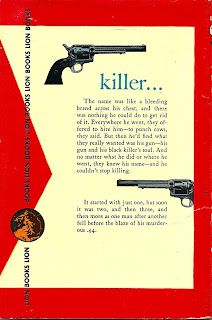 .44 is about the weight and guilt of taking a human life. There’s nothing flippant, heroic, or exciting about the killing in the opening chapter. Right from the start, DeRosso lets us know that Harland is capable of doing wrong, and that all the terrible things people have been saying about him – that he’s cold-blooded and merciless – are true. He makes for a compelling protagonist because we are introduced to him at his absolute worst – and from there he has to prove not only to us readers, but also to himself, that he’s still a human being worth of sympathy.

DeRosso’s female characters are just as morally complex as Harland. Lorraine Lancaster (the dead man’s wife) and Glennis Jordan (sister of a local rancher) are violent, vengeful women who don’t sit at home waiting for the men to take care of business. They take to their horses and comb the barren plains themselves in search of Harland themselves. But as the story progresses, Lorraine and Glennis begin to diverge. Like two sides of the same coin, their rage is linked by drive but separated by motivation. As with Harland, DeRosso feels that violence, though often warranted, isn’t always morally justified, and that acting upon it is a heavy burden for anyone to carry.

A dark, psychological Western, .44 merges the brooding sensibility of noir with the stark, iconic desert landscapes that symbolically leave the characters exposed and vulnerable to the harsh high noon sun, but also those parts of themselves that they’d rather not give in to. DeRosso’s writing is stark and hard-hitting, devoid of excessive flourishes yet finely attuned to the inner-lives of his characters – and we can’t forget the suspenseful shootouts. When its lean but dynamic 159 pages are over, you can’t help but admit that .44 is one hell of a good Western.

“Harland could see the dark yawn of eternity in the muzzle of Lancaster’s .45.”

“Worthington’s heart was as unfeeling as a chunk of stone ripped out of the bowels of the mountain.”

“Night was starting to close in and in the thickening gloom her faced look wan and even distraught. But perhaps that was due to the twilight, Harland thought, and his own dark mood.”

“The land stretched empty and desolate and full of an inarticulate loneliness.”

“Don’t ever let me hear you say again that you want to kill. I know what it’s like. It isn’t the killings that you detest that are bad. It’s the ones that you enjoy.”

“Save himself. That was the bit that held him. Save himself for what. For the years ahead, for the gunmoney they would keep shoving at him. ‘Work, killer. Do your job. Here’s your wages.’ The empty, dark maw of years ahead, bleak and beckoning, unchanging. Save himself, for that.”
at June 12, 2009