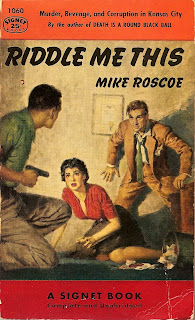 The shadow of Mickey Spillane looms large over Mike Roscoe’s Riddle Me This (Signet, 1953), the second entry in the Johnny April series. The first time I saw the name “Mike Roscoe” I was immediately reminded of Spillane’s iconic private dick “Mike Hammer” – and the fact that both names end with a not-too-subtle phallic reference doesn’t help either. In fact, the author’s name is probably one of the few original aspects to the book – it is the combination of two real life detectives, Michael Ruso and John Roscoe, who worked together in Kansas City before becoming writing partners. But the similarities don’t stop there.

Mike Roscoe seems to be well aware of the anxiety of influence, as he seems to use Spillane’s legacy as a model to capitalize on while also altering its design in attempt to make it his own. The general plot of Riddle Me This, much like Spillane’s groundbreaking I, The Jury (1947), begins with the death of a fellow private eye, which spurs the main character into action as he races against the police force to discover the criminal and exact retribution. Johnny April’s relationship with the police chief, just like Mike Hammer’s, is a mix of mutual admiration and professional rivalry. Both fictional detectives also happen to have sexy secretaries who are hopelessly in love with them.

Riddle Me This, however, is no I, The Jury, Roscoe is no Spillane, and Johnny April is definitely no Mike Hammer. April is dumb as a doornail, and Roscoe’s prose lacks not only the vibrancy and excitement that characterized Spillane’s novel, but also those odd moments of surreal poetry that remind you just how capable and skilled a writer Spillane could be when he was at his best. Nor does Riddle Me This come close to the strength and propulsion of Spillane’s plotting, which often goes overlooked by those who don’t look beyond his bombastic prose. Riddle Me This plods along with little excitement and scenes that go on too long because of unnecessary dialogue. Moreover, the clues turned up in the course of the investigation are held together by flimsy links that challenge not only the logic of the novel, but also the patience of the reader.

I came up off the floor in a hard, quick lunge, my hand flat and stiff and aimed for his belly. Just as the fingertips made contact, I rolled forward using my shoulder and arm muscles for extra push.

His belly was soft and yielding. My hand sunk in. I stood up and stepped back, quick, in case it wasn’t enough.

His face went dead white and he sank slowly, moaning to himself.
When he hit the floor, he vomited.

“You sonuvabitch. You shouldn’t stand so close to your words.”

He vomited again as I walked out.

Now compare it to a scene from I, The Jury:

I swung on him with all of my hundred and ninety pounds. My fist went in up to the wrist in his stomach. He flopped to the floor vomiting his lungs out, his face gradually turning purple.

Roscoe may borrow Spillane’s characteristic vomit-inducing beatings, but he can’t recreate the passion of the prose, or its gut-churning details that seem to ooze off the page like so much blood and…um, vomit. 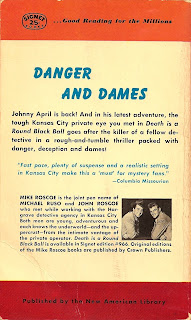 Riddle Me This does try to differentiate itself from Spillane by making a gallant attempt to be socially conscious. April is avenging the death of a black P.I., and throughout the novel he comes across racist white cops who wear their prejudice on their sleeve, to which April always responds with a punch to the nose. While the book’s advocacy for racial equality is certainly admirable, all too often it feels preachy and overly simplistic, as though Roscoe is just setting up straw men rather than fully grasping the gravity of the situation. In the book all it takes is one punch from Johnny Roscoe to change someone’s tune; things aren’t that easy to change in real life.

In attempting to revise Spillane’s model, Roscoe occasionally takes time away from the plot to take a pot shot at the other writer. “The tabloids scream murder, rape, syndicated crime, government corruption – but these pathetic creatures whisper to me about perversity, masochism and unorganized human frailties. The public doesn’t consider this aspect of ‘the great private eye’…” Roscoe talks big but fails to deliver anything close what he describes in this passage. The motivations of the crime are weak and ambivalent, which makes for an uneventful and unsatisfying conclusion. Moreover, he seems to have forgotten the “frailties” in writing his characters, as more often than not they come off as unconvincing cardboard cutouts rather than living, breathing human beings. Spillane’s characters at least carry their convictions strongly. They might not always come off as realistic or nuanced (particularly if they are Communists), but they have energy and drive that compels the narrative forward. Ultimately, even more than originality, this is what is most lacking in Riddle Me This: convincing characters and a story that draws you in and makes you eager to turn the pages.

Even though I didn’t much care for the book on the whole, I can’t deny that there were a few good lines worth quoting below, including a promising opening paragraph:

“It was raining, Goddammit. It was raining. Long cables of wet lashed the sky and earth together. Thunder ricocheted off the heavy, gray clouds. Rain is romantic in San Francisco. In Miami, it’s conductive to a number of interesting things. In Kansas City, it’s a godawful mess.”

“What a lousy goddamn rotten mess being a detective is sometimes.”

“I hit him. I hit him like a sonuvabitch, starting the blow from up high and dropping it across the right side of his mouth so hard I felt the shock along the soles of my feet. He dropped the camera. Then he sagged in the middle and crumpled at both ends, falling into a heap at my feet.”

“There was the smell of rain and fresh blood and stale urine. That was the smell Paul had died in. Maybe when his murderer died I could have a worse smell cooked up for him.”

“Life is a thin curl of smoke in the evening. When the cool night breeze hits the smoke there’s nothing hanging in the sky but a couple of whispy memories.”
at May 12, 2009