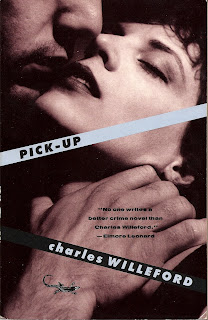 “I’m pretty much of a failure in life, Helen. Does it matter to you?”

“No. Nothing matters to me.” Her voice had a resigned quality and yet it was quietly confident. There was a tragic look in her brown eyes, but her mouth was smiling. It was the smile of a little girl who knows a secret and isn’t going to tell it. I held her hand in mine. It was a tiny, almost pudgy band, soft and warm and trusting. We finished our drinks.

That’s the sort of one-two punch Charles Willeford delivers again and again in Pick-Up (Beacon Books, 1955). First, a sobering dose of existentialism, concentrated into a solid brick of reality that hurts to swallow, then he follows it up with an enigmatic description that belies the surface simplicity of the text. Just what is that smile on her face? Who is this walking female contradiction, at once a world-weary lush and a small child, and who lives for love and yet loves because there is nothing left to live for. And if the man is a failure, why does he even continue to try, even if all he tries for is death?

Coming after a collection of poetry (Proletarian Laughter in 1948) and Willeford’s debut novel High Priest of California (1953), Pick-Up follows the doomed trajectory of a pair of alcoholics who meet in a bar and find they share a common sense of futility weighted down by dashed dreams and hopeless futures. Harry Jordan is an aspiring artist who spent World War II painting murals instead of fighting, and who afterwards taught when he lost confidence in his own work, and ultimately gave up teaching when he lost faith in his students. Helen Meredith drank her way out of a staid, middle-class existence ruled by constraining morality, an overbearing mother, and a husband she didn’t love. Neither does Harry show much concern for his wife and child on the other side of the country. Disappointed by the past and unconcerned with the future, Harry and Helen join to drink away the days in desolate companionship.

But then, something like love develops between them. A love that spurs them back to life as much as it hurtles them towards death. Unable to live apart from one another, even long enough to work a job, they realize that the real problem is that they are unable to live. Acting on a suicide pact, they soon realize that are also unable to die. So, the two of them continue to wallow in life’s wasteland of nothingness, all the while hoping and searching for a way out – permanently. 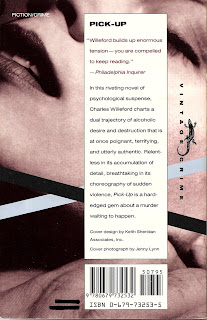 Willeford shares with David Goodis an affinity for characters stuck ‘down there’ – for whom the gutter and the mire are like cozy fixtures to come home to. But it’s important to recognize that these authors aren’t slumming, or dragging their pens through the mud for the sake of dirtying the page. Far from it – they strip away the distractions and complacencies and obligations give life the illusion of order and purpose in order to get to the heart of the matter: to find that common strain of uncertainty that we all have to deal with. Nor is there anything grimy about their prose: there is never the sense that they are exploiting their characters for the sake of shocking sheltered readers. And instead of gutter lingo, their books are filled with the lamentations of those who can no longer cry for themselves or ask for help from others. They speak to no one, yet they speak for everyone, and therein lies the paradox. In screaming loneliness, Pick-Up manages bring us together.

Those who have read Pick-Up are well aware that the last two lines of the novel throw you for a loop that makes you start back at the beginning and re-think all you have just read. I struggled with whether or not to discuss those lines on this blog, because on the one hand I think they merit a discussion, yet on the other hand to reveal them would to spoil Willeford’s carefully crafted novel. In the end, I have decided against it and will leave the novel’s finale a secret. As William Denton notes on RARA-AVIS, “You could analyze Pick-Up with and without the last two lines, and it'd work perfectly both ways. Neither version is better than the other.” I agree, and would only add that what I think Willeford is doing is challenging not only the pervasive archetypes of the hardboiled genre, but also our preconceptions as readers. In the end, I don’t think he’s being antagonistic at all, but instead wants to remind us how universal despair really is.

Pick-Up is currently out of print, though used copies of the 1990 Black Lizard reprint can be found for decent prices. Munseys has made available a free e-text of the book. Those looking for more information on Charles Willeford should check out Mike White’s thoroughly researched essay “Madness in the 20th Century” over at Cahiers du Cinemart. Don Herron also has a nice piece called “Collecting Charles Willeford.” Dennis McMillan also runs an informative site, which includes a nice introduction by Maura McMillan. Lee Goldberg also has a fascinating blog post about a once thought lost manuscript by Willeford. For a complete bibliography, check out RARA-AVIS.

And now for some quotes from the book:

“The Great American Tradition: You can do anything you think you can do! All Americans believe in it. What a joke that is!”

“His large brown eyes, fixed and staring, were two dark mirrors that seemed to hold my image without interest, without curiosity, or at most, with an impersonal interest, the way one is interested in a dead, dry starfish, found on the beach.”

“As far as I was concerned the world we existed on was an overly-large, stinking cinder, a spinning, useless clinker. My life meant nothing to me and I wanted to go to sleep forever and forget about it.”

“Any premise which bases its salvation on blind belief alone is bound to be wrong, I felt. It isn’t fair to those who find it impossible to believe, those who have to be convinced, shown, who believe in nothing but the truth.”
at May 14, 2009