Interview with James Reasoner on "Hunt At the Well of Eternity" (Leisure Books, 2009) 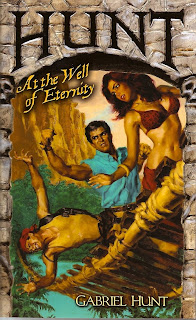 April 28th marked the debut of a new adventure hero, Gabriel Hunt, in the novel Hunt at the Well of Eternity (Leisure Books, 2009) by James Reasoner, acclaimed and prolific author of more than 200 books. From detective tales in Mike Shayne Mystery Magazine to the ten-volume Civil War Battle Series, Reasoner has written it all – and Hunt at the Well of Eternity exemplifies both his ability to craft thrilling plots and his eye for historical detail. This first book in the series finds Hunt at a gala event at the Metropolitan Museum of Art in New York City. Bored by the formality, Hunt gets more excitement than he bargained for when the waiters suddenly drop their trays and turn their guns on a mysterious woman carrying an antique whisky bottle wrapped in a vintage Civil War flag. The woman is kidnapped, but Hunt manages to save the flag and the broken remnants of the bottle, which lead him first to Florida to investigate a Southern regiment, and then to the jungles of Guatemala, which might just be the home of the enigmatic fountain of youth. Thoroughly engaging from first page to last, Hunt at the Well of Eternity is an exciting and promising start to the Gabriel Hunt series. I’m certainly looking forward to reading of our hero’s future adventures.

I recently had the pleasure of interviewing James Reasoner about Hunt at the Well of Eternity, series novels, adventure fiction, and his vast experience as a writer.

Pulp Serenade: Hunt at the Well of Eternity is the first in the Gabriel Hunt series, our first introduction to a character that will appear in several other books down the line. How was Gabriel Hunt “born” both as an idea, and within your own book?

James Reasoner: Gabriel Hunt came out of the mind of Charles Ardai and was born from a desire on Charles' part to bring back the sort of pulp adventure fiction that was popular in the past. He wrote an excellent series bible that really made the character come alive, so by the time I became involved, Charles had already done all the heavy lifting, creatively speaking. While I was writing my book, several little touches occurred to me that I thought might fit in well with the character, so I emailed Charles to make sure he agreed and we were able to work all of them into the manuscript. 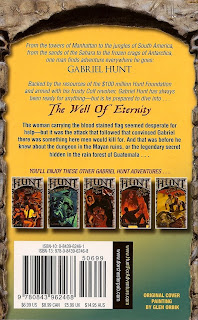 PS: Is crafting a series character different than writing a character you know will only be in one book?

JR: If it's a character in a house-name series (and I've written a lot of them), you can't have any major changes taking place. Gabriel Hunt falls into that category. He has to be essentially the same character at the end of my book as he was in the beginning, so the next writer can pick up the reins. If it's a series of my own, I have more leeway, so I can have characters change and develop as they go along. I tend to think in the long run when I'm plotting a series, so I might plant the seed for something that won't really become important until two or three books later. Having that time is a real luxury. In a one-shot book like Dust Devils, I have to get everything that's important about those characters into that book, so I have to be more selective about what I include.

PS: The story is fast paced and takes us from New York to Florida to Mexico and Guatemala, and finally back to New York. How do plot out your novels? Do you do a lot of outlining?

JR: I've worked from all sorts of outlines in my career, from lengthy, detailed ones of 40 or 50 pages down to half a page or occasionally no outline at all. In general I prefer a four or five page outline that gives me enough structure so I don't get lost as I go through the story, but enough leeway for the writing to still be creative and fun. In the case of Hunt at the Well of Eternity, there's a lot of Doc Savage influence in it, especially in the way it's structured. I was a huge Doc Savage fan as a kid during the Sixties, when the Bantam paperback reprints were coming out regularly.

PS: Did you re-read any classic adventure writers to get in the spirit for Gabriel Hunt? Or do you have any favorites that you can recommend to readers (such as myself) that aren’t as familiar with the genre?

JR: I didn't re-read anything specifically to get ready for Gabriel Hunt, because so much of it is already imprinted on my brain! I'd recommend the Doc Savage novels by Lester Dent, as mentioned above, especially the ones originally published in the first three or four years of the pulp. Really, any of the Docs published before 1940 is going to be pretty good. Robert E. Howard is still best known for Conan and his other fantasy fiction, but he was one of the best pure adventure writers of all time. I'm especially fond of his stories set in the Middle East about Francis X. Gordon, also known as El Borak. P.C. Wren is the classic author of French Foreign Legion yarns such as Beau Geste. H. Bedford-Jones was one of the most prolific pulp authors and wrote scores of adventure novels and hundreds of short stories and novelettes, some of them historical, others contemporary to his time. Edgar Rice Burroughs is another long-time favorite, and as good as many of the Tarzan novels are, I like the John Carter novels even more, and for kitchen-sink adventure novels that throw in just about everything, you can't beat The Mucker and Return of the Mucker. This just barely scratches the surface of the vast amount of excellent adventure fiction written in the first half of the Twentieth Century.

PS: What is an average writing day like for you?

JR: I write on the computer, although occasionally I might make notes for something in longhand. My first several novels were first-drafted with a fountain pen in spiral notebooks, then I worked on manual typewriters, electric typewriters, and finally computers. I get nostalgic for the typewriter days every now and then, but I'd never go back to one. I like the speed and the ease of rewriting on a computer.

I write about three hours in the morning, take a break for lunch, and then write another four or five hours in the afternoon, sometimes longer if I have a deadline pressing. Research, answering emails, things like that, are usually done in the evening. When I was younger I wrote a lot at night, sometimes all night, but that changed when kids came along. Occasionally I'll play a movie soundtrack or a jazz CD while I'm working, but for the most part I write in silence.

PS: Your first novel, Texas Wind, was published in 1980. Has the process or experience of writing changed for you since then?

JR: Technically, the process has changed. As I mentioned above, my first books were written with a pen and then typed up by my wife Livia or myself. She still edits all my work before it's ever sent out, but we email files back and forth now. Creatively, I hope I'm a little better at it now. After all these years, plotting is easier most of the time. One very important thing that hasn't changed is that it's still fun. I wrote to entertain myself long before I was ever paid for it, and I still try to enjoy myself with everything I write.

PS: As someone who writes so prolifically in so many different genres (Western, Mystery, Adventure, Non-Fiction, Fantasy, War), what is it like switching between them so often? Do you have a favorite?

JR: I'm lucky in that when I was growing up I was an avid reader, and I read widely in many different genres. That's carried over into my writing. I really enjoy switching genres (and combining genres at times, as well). Because of that background as a reader, I'm able to switch between genres as a writer without much trouble. I'm greedy. I want to write it all!

I started out as a mystery writer, though, and had published probably a couple of million words of mystery fiction before I ever wrote a Western, so mystery is my first love. But I found that I have a real affinity for Westerns, too, and have written more of them than anything else.

PS: What’s up next for you?

JR: A lot of books under various pseudonyms and house-names, mostly Westerns but a few historical novels and a contemporary thriller thrown in there, too. Nothing under my name is in the works at the moment other than a short story or two, but there are several deals pending that could put my name back out there on the shelves again.

PS: And finally, do you have any writing wisdom you can share with writers (of all ages)?

JR: The things that have kept me in the business all these years are persistence, professionalism, and a willingness to take chances. You have to be stubborn enough to really believe that you can do this. I went through a dry spell in the Eighties when I couldn't sell anything, but I kept writing, trying everything I could think of that I might be able to sell. This was after I had published several novels and fifty or sixty short stories. I remember being excited to get a check for $60 from a men's magazine for a short story. So I wrote more of them, and while they didn't all sell, enough of them did to keep me going as a writer. Then a friend asked me to ghost a book for him, and I made a contact that led to some work for a book packager, and suddenly I had four books under contract and have never looked back since. That's the persistence part. The professionalism is as basic as keeping up with the markets and what's being published, and submitting material that's presented the way the editors want it presented. Several editors have told me that my manuscripts are some of the cleanest and easiest to read that they've ever seen, and that's what I strive for. As for the willingness to take chances, if someone asks me to write something I've never written before, I don't hesitate. My answer is, "Sure, I can do that." For the freelance writer, those are words to live by, I think.
at May 06, 2009