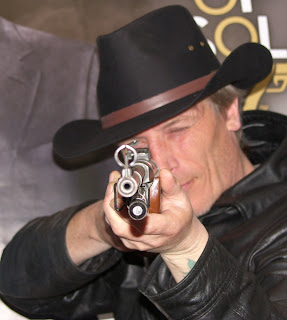 One of the most unique voices on the Web belongs to Gary Dobbs, who generously shares his extensive knowledge of The West on his blog The Tainted Archive and has published a number of short stories on the web on such sites as Beat to a Pulp, Thieves Jargon, and A Twist of Noir (1, 2, and 3). On June 30th, his debut novel, The Tarnished Star, will be published by Robert Hale Ltd/Black Horse Westerns under the name "Jack Martin." The story concerns Cole Masters, an honest sheriff who arrests the son of a wealthy family for murder, and soon finds that upholding the law isn’t as easy – or safe – it is seems. You can preorder the book from either The Book Depository or Amazon.

I recently had the pleasure of interviewing Gary about his upcoming novel, his passion for The West, as well as his Wild West Monday initiative.

Pulp Serenade: First, can you tell us something about The Tarnished Star? Briefly, what is the story, and where did you get the idea from?

Gary Dobbs: I've always loved the traditional western - the films of John Wayne, Gary Cooper, James Stewert and others of that ilk. And I also have a great love for writers like Louis L'amour, Max Brand, Elmer Kelton. I spent my teens reading westerns by George G. Gilman, a man who I think wrote westerns with the lean qualities of Chandler. So when I decided to write a western novel I think I channeled all this into my own work and with The Tarnished Star I think I've produced a western that could have come out of the Forties or Fifties but is modern in its pace and substance. It's about courage and the need to stand up and be counted and not expect some higher power to sort out life's problems. Hopefully it's everything a western readers needs for an enjoyable few hours between the covers.

PS: Why publish under the name “Jack Martin”?

GD: Well Jack Martin was my maternal grandfather and probably the greatest hero I have ever know. He gave me my love of the wild west or rather the mythical stories of the wild west. And these remain with me to this day - I love all sorts of fiction - horror, crime even science fantasy but whenever there's a western about I always gravitate to it. You can give me The Magnificent Seven over Star Wars any day of the week. And so by adopting the name of Jack Martin every western I write will be a tribute to the man who loomed large in my life and still does even if it has been nearly three decades since he passed away.

PS: How did you get connected with Robert Hale/Black Horse Westerns?

GD: I've always been a writer and published a number of stories and even a radio play but never a novel - although I'd written several over the years. And then when a friend of mine suggested I try a western I was initially dubious. Does anyone read westerns these days? Does anyone publish them? Some research led me to Robert Hale and I checked out several titles from the library. My first attempt for them came flying back and Tarnished Star was snapped up and I was delighted. 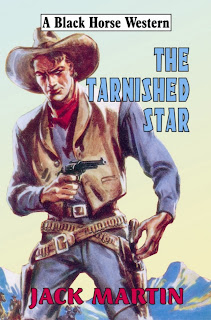 PS: When did you first become so interested in the Western genre, and what about it continues to appeal and fascinate you today?

GD: As I say my initial fascination was inherited from my grandfather. But it's a wonderful and versatile genre that doesn't deserve the bad press its gotten these last few years. Sure it often resorts to cliche but then what genre doesn't in some form or other? There's a certain freedom with the western and it allows the writer to play with themes and ideas that are unique to the genre. But I think that at the root of all westerns there is a morality that we have lost in modern life and that it resonates with readers even if they don't always realise it.

PS: The unique history and mythology of “The West” has continued to captivate both readers and writers for well over a century now. Do you have any thoughts on why it is so everlasting, and what it can offer to contemporary readers of the 21st century?

GD: A very good question. The West was being mythologiesed even while it was happening but beneath all this there is the basic concept of good and evil. The western also stands up for the little man - often a lone rancher going up against land hungry corporations or a man trying to build a life for himself and his family without interference from the outside world. It's all about braving whatever life can throw at you and enduring because of it. These themes are universal and timeless and have just as much relevance today as they ever had.

PS: On your blog, The Tainted Archive, you write a lot about Western history. Where do you do your research, and what role did it play in writing The Tarnished Star?

GD: I wouldn't call it research since it's always been a massive interest with me. I have a large library of western history and of course I buy anything new that I can find - The monthly magazine Wild West from the Weider History Group keeps me up with current developments with a western connection. I've probably got an encyclopedic knowledge of western lore and although I may have to check up on something from time to time I think I'm carrying more than is healthy around within my head. I; I'm hoping to visit America next year, touring the present day West and I think that maybe one day I'd like relocate and become a citizen. I often joke to friends that my interest comes from the fact that I was Calamity Jane in a previous life.

PS: As someone who writes both Western and Noir fiction, do you see any similarities between the two genres?

GD: Very much so - what is Chandler's lone detective wandering the mean streets, if not a modern version of the sole cowboy riding the range? In some ways the structure of noir and westerns are very similar. It's usually someone going up against sinister and powerful odds with only their own ingenuity and courage to protect themselves.

PS: In addition to being a writer, you are also an actor and a cab driver. Have these other professions aided your writing in any way?

GD: Cabbing helps pay the bills - but writing and acting are two side of the same coin. Both enable me to live in an imaginary world and I've never happier than creating something, bringing something into being. Ideally it would be great to write a classic western that brings the genre back to the forefront and then take a part in a movie version which would be directed by the wonderful Clint Eastwood and starring someone like a middle period John Wayne. 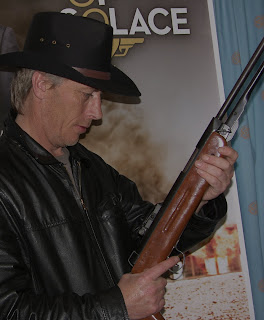 PS: Is this the first novel you’ve tried writing? If so, what was it like making the transition from short stories to this longer format?

GD: No my first novel I wrote in longhand when I was about 12 or 13. It was called The Ultimate Spy and was a cross between TV's The Six Million Dollar Man and a character from the 2000AD comic called M.A.C.H 1 - which I think stood for man activated by computer hyperpuncture or something like that. I wish I still had that to read now. I've written several novels in the past and one, Smith's Way which was a crime thriller featuring The Queen, Prince Charles and a plot to liberate the Royal Corgi's almost saw print and was part dramatised on BBC Radio Wales. But The Tarnished Star is my first published novel.

On the subject of short stories - I find the small form harder than novels since you've got to make every word count.

PS: Wild West Monday the Third is approaching – would you care to say anything about your initiative? And are there any books you can recommend as starters for those readers not familiar with the Western genre?

GD: I just think it's a shame how neglected the genre has become of late and with the internet and its possibilities of worldwide interaction between fans I think we can bring it back into favour. I mean go to any bookshop and most books are like 500 pages plus - now not every story needs that amount of words. Books have become too much like product, indistinguishable from groceries. I think the story should dictate the type and length of book and not some misguided idea that all books must be of a uniform size.

PS: Who are your biggest literary influences, and what about them has most influenced your work?

GD: I tend to gravitate towards entertaining writers - I'm not worried about literature for literatures sake. Fuck trying to be clever just give me a good story. Ian Fleming is a massive influence because his writing creates a chemical rush in the brain which makes the reader hurl through the pages. British western writer George Gilman is also another great influence because his books are perfect in the sense of being entertaining books and the character he writes about "Edge" is like "The Man with No-Name" taken to the extreme. I've read a lot of Stephen King, Clive Barker, Dean Koontz. Mickey Spillane, Terry Pratchett in my time and they all have one thing in common - Entertainment.

In my own writing if I can grab the reader the way all these guys do then I'll be a happy man. I guess with my westerns I like to be something of a cross between Louis L'amour and George Gilman with a little Ian Fleming thrown in there.

PS: What’s next for you? Any future projects that you can divulge?

GD: I'm working on several projects at the same time - an historical crime, a comic fantasy and the second Arkansas Smith adventure - the first Arkansas Smith will be out in March 2010 from Robert Hale LTD. I'm starting work on another series of Larkrise to Candleford in June and I think we'll be filming through to Jan 2010 so I've plenty on my plate. I love the fact that George Gilman, the author I used to read while skipping school loves Larkrise and never misses an episode, that's kind of surreal. And of course The Archive will not be neglected no matter what else I am doing.
Posted by Cullen Gallagher at 12:00 AM