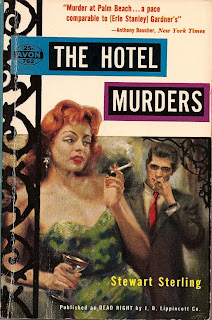 Stewart Sterling (pseudonym for Prentice Winchell) certainly chooses interesting professions for his characters. His most famous character is Fire Marshall Ben Pedley, who fights both crime and flame in such novels as the excellent Nightmare at Noon (which has one of my favorite descriptions, “A venomous cauliflower of smoke blossomed suddenly at the sill”). Under the name Spencer Dean, Winchell also created Don Cadee, a department store security officer.

And then there’s Stewart’s other famous series character, Gil Vine – an in-house detective for the Plaza Royale Hotel in New York City – who made his novel debut in 1947’s Dead Wrong. I started the series out of order with the fifth book, The Hotel Murders (Avon #762, 1956), originally published as Dead Right (J.B. Lippincott, 1956). As novel as the occupation is, the plot hardly seems to take advantage of all it has to offer. As the story begins, Vine is called down to Florida to fill in for their local house detective who is in the hospital. He immediately spots Mark Trevar as a suspicious character – but little did he expect that Trevar was a wire-tapper out to nail a big business tycoon, nor that he would wind up with a bullet in his skull. It looks like suicide, but when a hotel employee takes it on the lam and a businessman attempts to steal the tapes himself, Vine starts to think these hotel walls are withholding valuable ¬– and deadly – secrets.

The fun wordplay and action sequences that I remembered from Nightmare at Noon seemed to be missing from The Hotel Murders, which plodded along with too much dialogue and too few sparks of excitement. Like a lot of writers from this era, the similes and metaphors are wildly inventive – as though the authors are competing to outdo one another. And this is where Sterling seems to be at his best – he seemingly has a limitless supply of “new” ways to describe the most common elements. Unfortunately, this inventiveness doesn’t extend to the plotting. The suicide frame-up and blackmail angle is hardly unique, and Stewart has nothing new to add to the scenario. The investigation unfurls in a rather staid manner, with revelations that are neither surprising nor satisfactory. 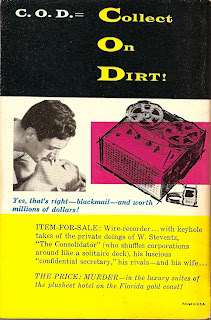 Not having read the other Gil Vine novels, I can’t say how this one compares. Being impressed by Nightmare at Noon, I am certainly going to continue to read other Sterling novels (and have a nice Ace “double” sitting on my shelf – The Body in the Bed and Dying Room Only). Richard Moore has an informative essay over at Mystery*File called “Stewart Sterling: King of the Specialty Detectives” which is very positive about both the Fire Marshall Pedley and Gil Vine series. Has anyone else read Sterling? If so, please chime in with your thoughts in the comments section.

As always, a few samples of The Hotel Murders:

“He lay sprawled across the green-damask sofa just to the right of the corridor door. The bold stare of the poodle-dog brown eyes made me think, for one second, that he was simply stupefied with liquor. But the gun in his right hand pointed to a pencil-wide ribbon of shiny cellophane which seemed to have been fastened behind his right ear with a gray eraser. The smell of burnt powder was sharp.”

“My recollection is she had cold vichyssoise and boeuf Stroganoff at that luncheon but that’s because I was watching her every second. I can’t remember a thing I ate.”

“His clothes looked as if he’d been made up for a Gay Nineties masquerade; it must have been a fine tailor who could make a suit look that outdated.”

“It’s a stupid sleuth who lets his emotions color his judgment. And an inhuman one who can keep from having it happen once in a while.”
at May 21, 2009