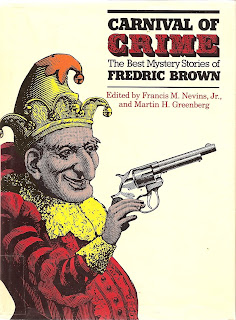 Reading Francis M. Nevins, Jr. and Martin H. Greenberg’s excellent anthology Carnival of Crime: The Best Mystery Stories of Fredric Brown (Southern Illinois University Press, 1985) I was struck with this realization: Yes, Fredric Brown does believe in justice – but what an unsettling, discomforting sense of justice. The old adage is that the punishment should fit the crime, but in Brown’s paradoxical world, the punishment always fits the criminal. A slight difference in rhetoric, but astronomical when put into practice.

[Note: I’ll warn you now – slight spoilers ahead for some stories. I’ll try and keep them to a minimum, however, and use only the details necessary to illustrate Brown’s unique worldview.]

Consider a story like “The Dangerous People” (originally published as “No Sanctuary” in Dime Mystery, August 1949) in which two strangers sit in a train station, each one thinking that the other is an escaped homicidal lunatic. So there they sit, hands clenched around a weapon and ready to strike, while meanwhile the real criminal walks free. And that is where the ironical justice is: a “lunatic” escapes one asylum and walks into the bigger asylum that is the everyday world. A clever turn of events, certainly, but in Brown’s twisted reality, there is no comforting resolution to the story. The real killer walks among us, while “normal” citizens are slowly turning into crazed murderers themselves.

In other stories, however, the real criminals do more than walk free: innocent lives pay for their crimes (though it is debatable just how “innocent” anyone really is). Take “The Night the World Ended” (Dime Mystery, January 1945), in which two journalists play a trick on an alcoholic bum named Johnny Gin. Fabricating a phony newspaper that pronounces the world will end that night, they bet whether or not he will come out of his drunken haze and return to reality. Things go awry, guns go off, and a couple bodies pile up – and I won’t say whose. The point, however, is that Johnny Gin plays the sap not just to a couple of cocksure writers, but also to life itself. He drinks to forget his past, and in the midst of all the chaos he comes to remember just what it is he put behind him – but Brown never reveals it to us. He allows Johnny Gin that little bit of privacy, that small but sacred piece of information that makes him human to us readers. Was Johnny a criminal who is now paying for his crimes? Or is he just an average Joe? Maybe, after all, he is just a nobody, like everyone thought. And maybe so are you and I. And if that is the case, so are the journalists who started this screwball gag that snowballed into an existential boulder that knocked Johnny Gin back into the gutter from which he came – and knocked a few other people over, as well. All of us – nobodies doing nothing nowhere.

Now, where is the justice in that? 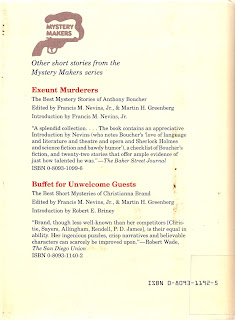 That is where the joke is. The two journalists wanted to fabricate the end of the world for Johnny Gin? Well, essentially, that is just what they did. It didn’t happen the way they imagined it would, but it happened nonetheless. So tomorrow, after the story is over, they will open the paper and see exactly what they jokingly predicted. Only this time it won’t be funny.

Other excellent stories include the soberly macabre “Little Apple Hard to Peel” (Detective Tales, Feb 1942), in which comeuppance comes at a big cost for both the giver and the receiver; Nightmare in Yellow (Nightmares and Geezenstacks, 1961) in which a man’s desire for freedom is granted, but not in the way he expected; and “The Case of the Dancing Sandwiches” (Dell, 1949), the hardest to find of Brown’s novellas and an extremely clever Woolrich-esque search to exonerate a wrongly jailed man – worth reading just for the pleasure of seeing how Brown incorporates the title. In an otherwise excellent story of psychological torment, “I’ll Cut Your Throat Again, Kathleen” (Mystery Book Magazine, Winter 1948) jumps the gun with its twist ending and delivers its merciless denouement without proper build up. But even a flawed Brown story has his unmistakable sensibility – like a Cheshire cat, he grins knowing the worst is still yet to come.

Instead of choosing my favorite lines from all the stories included, I decided to reproduce the final story in the collection: a piece of Brown’s flash fiction, his entire philosophy boiled down to six sentences.