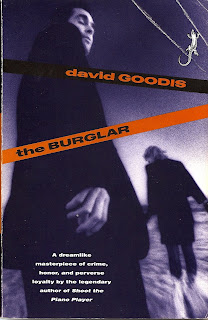 David Goodis is anything but a forgotten author – but his 1953 novel The Burglar might just qualify as “forgotten.” Originally published by Lion Books, it was reprinted by Black Lizard in 1991, and is now once again out of print. Even beat-up copies fetch a decent price online, which certainly limits the number of readers who can get their hands on it. Its scarcity is a disservice to Goodis’ legacy, as The Burglar not only stands out as arguably one of his strongest works, but also one of his most unique. Unlike the quotidian characters with latent criminal desires that are typically the focus of his works, The Burglar instead chooses a quartet of thieves. And nor are they washed up and broken down like the musicians and artists of Down There or The Street of No Return – these crooks are savvy and successful, as the opening heist scene exemplifies.

Even though they just stole a hundred thousand dollars worth of jewels, all is not well amongst Nat Harbin’s gang. First there’s the girl – Gladden – who is in love with him, and whom he has brought up like the little sister he never had. Bored, lonely, and unsatisfied, she daydreams at the dinner table. When Nat reminds her they are both still young, she coldly replies, “We’re half in the grave.” And then there are the two goons – Baylock and Dohmer – competent at their craft, but lacking Nat’s artistry and Gladden’s heart. And then there is Nat himself, a child of the depression whose parents suffered to save the family and died failures. He’s burdened by guilt – a sense of loyalty to a dead man who taught him everything he knows, and whose daughter he vowed to protect.

One day everything changes. Nat meets a woman in the bar, and suddenly he feels free – able to leave his life of crime behind him, able to leave those two goons in the dust. Able to say goodbye to Gladden. So he does – and that’s when he realizes he’s been trapped by a third party who wants to blackmail him and his cohorts and take all the jewels for himself. Responsible for breaking his family up, Nat is more vulnerable and alone – and guilty - than ever before. 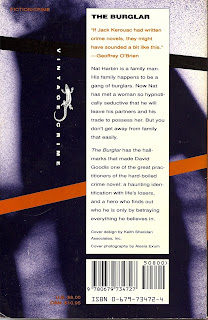 The Burglar also stands out for its focus on a group dynamic as opposed to a solitary protagonist. (The only other two works of his that come to mind are Black Friday, which similarly concerns a band of thieves but the main character is an innocent man whom bad luck and fate conspired against, and The Blonde on the Street Corner.) This significance becomes apparent when you begin to examine the bitter homefronts of the sour relations of Retreat from Oblivion and the marital anxieties of Of Tender Sin: all of these characters are striving for a functioning homelife and unable to find it. But in The Burglar, the characters have created a working family in which not only does everyone have a role to perform, but everyone also profits in the end. But even this does not quell the latent paranoia and lingering ennui that lies beneath the surface of all of Goodis’ novels. And in the end, Harbin and his crew are no different than any of Goodis’ other characters: they destroy what they love and sabotage their own dreams.

And unlike The Wounded and the Slain, there is no pretense of a happy ending. Harbin and Gladden give everything they’ve got, only to discover that it isn’t enough. In Goodis’ world, it never is. And that is the most despairing of all of the author’s reoccurring themes. The one reassuring fact is that Goodis, like his characters, never gave up, and would go on to publish nine more novels, including the highly underrated Somebody’s Done For, a fitting title for his last novel, which is also arguably the pinnacle of his career.

A few quotes from The Burglar:

“The night air had a thick softness and the smell of stale smoke from the factories that had been busy in the day, and the smell of cheap whiskey and dead cigarettes and Philadelphia springtime.”

“Gerald was always contending that burglary is no special field of endeavor, and every animal, including the human being, is a criminal, and every move in life is part of the vast process of crime.”

“As matters stood, life offered very little aside from an occasional plunge into luxurious sensation, which never lasted for long and even while it happened it was accompanied by the dismal knowledge that it would soon be over.”

“He couldn’t speak. The thing that crushed down on him was the sum weight of all the years, and her voice was a lance cutting through it, breaking it all up and showing him it added up to nothing but a horrible joke he had played on himself.”