"You Play the Black and the Red Comes Up" by Eric Knight (Richard Hallas) (Black Lizard, 1986) 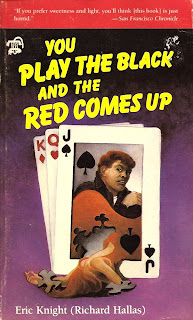 It’s a fitting irony that one of the great American hardboiled novels should be written by a British writer, and that after committing to paper the ceaseless corruption of the human soul and the perverse surreality of the American landscape he would go on to write about the earnest love between a boy and his collie. The writer is Eric Knight, the dog is Lassie, and hard-hitting, Depression-era noir? You Play the Black and the Red Comes Up.

Originally published in 1938 under the name Richard Hallas, You Play the Black and the Red Comes Up destroys its main character’s sense of security in the very first line. Dick’s wife, Lois, has taken their child away from “this lousy Oklahoma mining town” and off to California to make her dreams come true. But noir isn’t a world where dreams come true – only nightmares do. It’s only fitting that Dick and Lois ran a diner – an iconic American establishment for the lost, the forgotten, and the lonely. For now Dick is just like one of his customers, and he hops a late-night freight to go in search of his family. “You could see the glow of the smelters a long way off,” he says of his final, fleeting glimpse of home. And as those fires disappear in the night, Dick approaches an even more infernal destination: the arid desert climates send Dick into delirium, culminating with the California sun and a water spigot offering false promises of relief and salvation.

Penniless, friendless, and starving, Dick signs on to a small-time con that winds-up getting him in big-time trouble. The cops are after him for murder and larceny, his new friends are involving him in a religious cult scam that grows larger with every passing day, and the goal of finding his family fades further and further into the past.

While touching on several noir cornerstones (heck, even its title embodies one of the seminal noir tropes of cosmic bad luck), You Play the Black and the Red Comes Up is certainly atypical in many regards. The plot hinges not on one central “mystery” but on a perpetually expanding web of immorality, at which Dick is the center. In his highly perceptive essay on the novel, Woody Haut wrote that, “Knight’s book was neither a whodunit nor a detective novel, but was anthropological and political in scope. While eschewing Chandler’s wisecracking artificiality and cynicism, You Play the Black... contains a playfulness noticeably absent in the work of Cain and McCoy.” Dick is an American everyman, and the westward journey his own Manifest Destiny that reveals a continent of debased morality, and his own complicity in the plague. 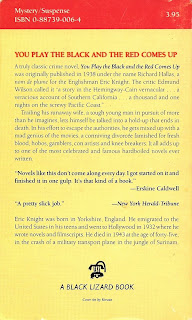 One of the most interesting things about the book is its ending, which makes a 180-degree turn from nightmare to fantasy without jettisoning its atmosphere of disconcerting unreality. It reminds particularly of F.W. Murnau’s film The Last Laugh (1924), in which the film’s sole intertitle admits that the real ending of the story is too depressing, therefore offering this “alternate” ending which is happy, although unlikely. Knight seems to be doing the same thing in You Play the Black and the Red Comes Up – even Dick is baffled at how things turn out. Allan Guthrie hit it on the nose by saying, “It is just brilliant, even if we don't really know if it is a parody or not. Frankly, I don't care. It's great!”

As always, a few quotes from the book…

“How can you bear it? Don’t you want to clench your fist and smash life in the face, beat its inane illogicalities to a pulp?”

“She started in, and I looked way down the beach. There was no one around at all. It was so lonesome the seagulls were sitting on the sand.”

“That’s what I can’t stand. It’s all too pat. It’s like a Hays-office ending to a movie plot. And it shouldn’t be. It should be illogical, unbalanced, bravely strong. I wanted it like that. And now even life is trite.”

“I lay there, trying not to move, and kept chewing my thumb to get my mouth wet; but it was no good and I could feel my throat dry and cracking far back down my gullet and my lips were split right open.”