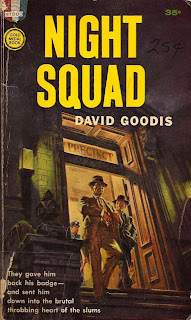 [Note: Night Squad is available to read online for free courtesy of Munseys.]

Published by Gold Medal in 1961, Night Squad was the second-to-last novel David Goodis wrote, and the last one he saw published in his lifetime. As the book begins, Corey Bradford is stumbling through a bar, the personification of a persona non grata. No one speaks to him, no one pays him any attention – they don’t even care enough to kick him out. He was a police officer who demanded graft from everyone in the neighborhood and got caught. Fate hadn’t conspired against him, nor was there any devious plotting by sinister forcers or dark-hearted dames. Like many of Goodis’ protagonists, Corey was responsible for his own downfall, and he has no pity or remorse for what he did. He recognizes he’s worthless, and can’t blame the world for thinking the same of him.

He’s nothing but a drunken nobody – until a fortuitous night when he jumps two gunmen and saves the life of a big-shot gangster, Walter Grogan. Walter hires Corey to find out who hired the gunmen. That same night, the police knock on Corey’s door – not to arrest him, but to hire him to help put Walter Grogan behind bars. Is this providence playing a nasty trick on Corey? No, instead this dilemma is just the manifestation of Corey’s own split desires. One the one hand, he wants to live up to the legacy of his father, as true-blue an officer that ever pounded the pavement. On the other hand, there is the futility of trying to clean up the streets, and the knowledge that dirty money will always pass through someone’s hands, so why not his own?

And this is the question that Corey grapples with until the final page of the book. This temptation towards corruption is one of the archetypical noir underpinnings – often it appears as the alluring femme fatale, who drags a seemingly innocent protagonist into a web of criminality and acts as an impetus for him to explore his darkest desires. And while the femme fatale is a reoccurring type in Goodis’ novels, in Night Squad she plays a much more peripheral role. Corey’s corruption comes from within. 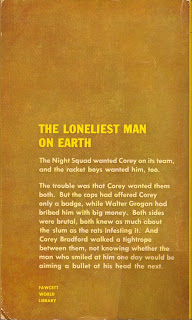 This seems to me one of the significant traits of the book. Whereas in earlier novels such as Dark Passage and Nightfall the protagonists suffered more than their fair share of bad luck, it is circumstance that brought out their change in character. Not so in Night Squad – Corey’s decisions are, if not clear-headed, at least deliberate. Goodis seems to have lost faith in his characters by this point in his career. Good intentions mean little anymore. And even though Goodis may try and force some sort of redemption, no one seems to be particularly convinced, least of all the writer.

At the time of the novel’s release, Anthony Boucher wrote in The New York Times, “The writing is more ponderous than Goodis’ best, and the moral thinking confusingly muzzy.” An astute critic, Boucher may not be enthusiastic about the book, but he is certainly perceptive. “Muzzy” is the right word for a novel that wants to believe in salvation but ultimately fails. And with a sraight-forward plot that takes care of itself very neatly, Goodis is free to “ponder” the uncertainties of his protagonist, the moral confusions that have haunted his novels from first to last.

The back of the original Gold Medal edition proclaims in bold, yellow capital letters, “THE LONLIEST MAN ON EARTH.” After reading the novel, I’m not sure whether they’re talking about Corey Bradford or David Goodis. It’s hard to think of a more fitting description for either the novel or his life.

As always, a few quotes…

“Yet even so, the grin was somewhat forced and the shrug was more or less faked. Under it, he squirmed and twisted as though trying to pull free from hard gripping shackles.”

“The Swamp was a labyrinth of alleys, and with an excessive number of oversized cats. The cats were very rugged, but every now and then a loner would be jumped by a pack of rats, and that would be the end of him.”

“That’s how it ended, boy. That’s what finally happened to your father, the good one, the clean one, the honest policeman. The rats got to him and he was meat for their bellies. You understand now why I gotta have the wine?”

“It gets to a point where it just don’t matter.”