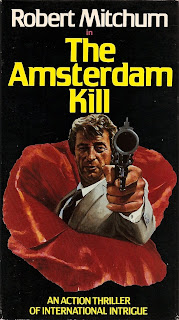 Robert Mitchum was in complete agreement with critics about his 1977 feature The Amsterdam Kill: they all hated it. And while it hardly holds a candle to the elegant craftsmanship of Out of the Past or The Night of the Hunter, I can’t deny that I thoroughly enjoyed the grimy atmosphere of The Amsterdam Kill. Predictable at most every step, it shows how even the most archetypical scenario can still be compelling.

Mitchum plays Quinlan, a former agent for the Drug Enforcement Agency who was dismissed for his own drug habits. Called out of retirement by a Chinese drug lord who wants to broker a deal with the government that would net him a passport and a large quantity of cash, Quinlan heads to Hong Kong to arrange everything. But when the raids turn up nothing, Quinlan begins to suspect that there is a leak in the DEA. Meanwhile, the DEA doubts Quinlan’s motives, and sends agent Leslie Nielsen to investigate his mysterious employer. 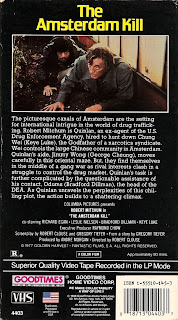 According Lee Server’s biography Baby I Don’t Care, the 60-year-old Mitchum was extremely irritated over the poorly organized production and having to do his own stunts. So severe was the enmity of the set that Mitchum seriously feared that the crew was taking out extra insurance on him and planning to kill him off. In Mitchum’s own words, “[The canals] are filthy, all those houseboats spewing out their garbage. And there I am, up to my neck in it… Can you see Elizabeth Taylor or Cary Grant in a canal? Or Victor Mature? Out of the question. He wouldn’t even get on a horse unless it was bolted to the ground. But me, with my shining heart, in I go…”

Still. he brings a magnetic presence to the role. Even New York Times film critic Janet Maslin had to admit as much: “This is the flimsiest movie Mr. Mitchum has made in some time, but for that very reason his performance is particularly arresting,” Maslin wrote. “There's something impressive about the imperturbability with which he marches through the most potentially embarrassing situations.”

Mitchum had an immutable charisma that was completely his own, and The Amsterdam Kill is evidence of how, even despite his disinterest, he was still able to elevate a mediocre, clichéd script into an entertaining night at the movies.

Courtesy of YouTube, here is the opening clip to the film, which was directed by Robert Clouse of Enter the Dragon fame.

Posted by Cullen Gallagher at 12:15 AM