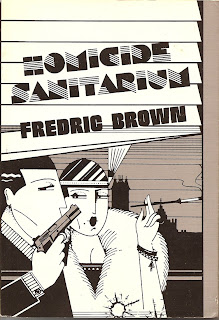 I’ve already written about Fredric Brown several times on this blog before, so before I launch into my own enthusiastic review, let me begin by quoting some names you might recognize. Donald Westlake said, “Fredric Brown had one of the eeriest and most fascinating minds of his time…he consistently saw new visions of strangeness and fear, or new ways of seeing the old. Every day was the day of the Jabberwock in that fertile imagination,” while Bill Pronzini simply stated, “Fredric Brown was one of the best storyteller of his time.”

It’s hard for me to top this praise, except to say that I am continually delighted to be reminded of the boundlessness of Brown’s creativity. “Twist endings” are, on their own, an expected cliché – but Brown’s twists are as twisted as his deviant characters, and as otherworldly as the purple monsters that stalk his sci-fi masterpiece What Mad Universe. But whether writing sci-fi or, in this case, mystery fiction, Brown's fiendish humor is unparalleled.

Homicide Sanitarium, the first volume in Dennis McMillan’s The Fredric Brown Pulp Detective Series, was originally published in 1984, with a second printing in 1987. Now out-of-print (though used copies can be found online at a reasonable price, though subsequent McMillan’s compilations can be quite pricey), Homicide Sanitarium collects seven short stories that are all excellent examples of the author’s style and capability.

Here’s a brief rundown of the stories included, as well as their original publication information and a favorite quote from each. 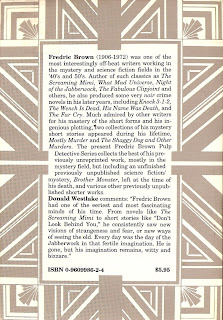 “Red-Hot and Hunted” (Detective Tales, November 1948)
“Is this a bad joke, Adrian, or is he…crazy?”
How far would an actor go to get a part? What are you to say when one calls you up to audition for a role and calmly confesses to murdering his wife?

“The Spherical Ghoul” (Thrilling Mystery, January 1943)
“I had no premonition of horror to come. When I reported to work that evening I had not the faintest inkling that I faced anything more startling than another quiet night on a snap job.”
A student working the night shift at the coroner’s receives an unpleasant shock when he discovers someone has mangled the unidentified corpse beyond recognition. But the door was locked, there was no sign of forced entry, and no one entered the building all night…

“Homicide Sanitarium” (Thrilling Detective, May 1941)
“Why, I wondered, in the name of sanity or insanity, had someone put that loaded tommy gun in my room?”
A detective takes an undercover job in an asylum to locate a missing killer.

“The Moon for a Nickel” (Street & Smith’s Detective Story Magazine, March 1938)
“Brakes screeched. A gun barked and a bullet buzzed past his left ear like an angry hornet.”
Brown’s first published story is a clever and charming tale of a stargazer whose telescope witnesses something it wasn’t supposed to.

“Suite for Flute and Tommy-gun” (Street & Smith’s Detective Story Magazine, June 1942)
“The flute, in the middle of a high note, seeming to give an almost humanly discordant gasp before it went silent.”
One of Brown’s unique gifts is to take an impossible-seeming title and make it possible. A flute-playing bank manager gets gunned down in the middle of rehearsal.

“The Cat from Siam” (Popular Detective, September 1949)
“And the cat, backing away from him, was shrinking to her real size, getting smaller, her claws still scraping the cement as she backed away.”
The stand-out story of the collection is a tense thriller about a university student, his professor, the professor’s daughter he is in love with, and a crazed lab technician on the loose with a gun. Brown’s prowess for psychological horror is on full display.

“Listen to the Mocking Bird” (G-Man Detective, November 1941)
“It’s a mocking bird. And it crochets.”
A performer’s unmatched ability for birdcalls gets him in trouble when witnesses hear his characteristic vocal abilities coming from the dead man’s room.
Posted by Cullen Gallagher at 9:21 PM