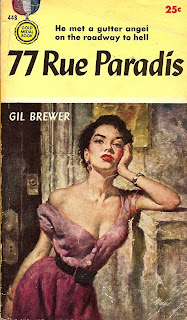 77 Rue Paradis (Gold Medal #448, 1954) may recall the title of Gil Brewer’s breakthrough novel 13 French Street (1951), but it is by no means a repeat of its predecessor. It is, at once, markedly different and unmistakably similar. Instead of the single-location, three-character narrative in which the major action is the steady crescendo of the main character’s psychological torment over repressed desires and mounting guilt, Brewer gives us a sprawling narrative of international intrigue with a considerably larger, more diverse cast of characters.

At the center is Frank Baron, an aeronautics engineer who is the victim of sabotage – but that’s not the way the rest of the world sees it. Instead, they see him as the enemy, and the numerous American soldiers who died because of his faulty aircrafts the victims. So Baron begins an international chase for the saboteur, which leads him to Marseilles, where the novel begins. Down and out, and flat broke, Baron thinks his search has come to an end – which is exactly when things really begin to start happening. Soon he finds himself caught between the French police and the international espionage agents who not only ruined his life and career, but have also kidnapped his daughter. And it looks like his only chance of saving her is to join the enemy and become the man the world thinks he is: a saboteur.

77 Rue Paradis certainly has an action-oriented plot when compared to 13 French Street, but for all the narrative differences there is one unalterable similarity: Gil Brewer, with his characteristic sympathy for ensnared protagonists worn down by guilt and self-doubt. And that’s really where the book shines. The intricately constructed (perhaps too much so) plot didn’t keep my eyes on the page. But Frank Baron sure did. The cold and detached businessman-like affections that united both the police and the spies didn’t wrench my gut until I was a shriveled, half-working human. Frank Baron did. 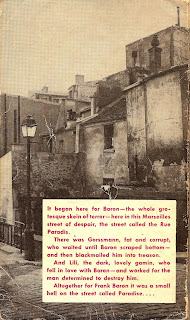 From the first line on the first page I opened to at random just now: “Baron was frightened. He knew he was doing the best he could, but the sense of fright and panic would not leave him.” Somehow I missed copying down this quote as I was reading the book, but glancing at it now, it seems to capture a sort of vulnerable privacy that has the power to mute all the chaos going on in the plot, and make it seem as though the whole world consists of nothing but this quiet moment paranoid hesitation.

The cover artwork, which vividly evokes the gritty atmosphere of the Brewer's prose, was done by James Meese. J. Kingston Pierce singled out Meese in one of his Killer Covers entries, and Kyle Katz has created a nice slideslow of several of Meese's covers here on Flickr. For the back cover, Gold Medal has used a photograph, which although a bit unusual for them, is a rather nice surprise.

I can safely say that there will be more Gil Brewer in my life in the near future. If you have any favorites or suggestions, please let me know in the comments section.

And now for a few favorite passages from the book, starting with the knock-you-on-your-ass opening line:

“The sensuous scarlet glow from the floor lamp in the cheaply furnished room seeped under the partially closed lids of Baron’s eyes, and hey lay rigidly on the bed, thinking it all through one more time with a kind of fevered restlessness.”

“Then somehow he knew she was gone. There were a few more spots he might try, but he felt it, a washing away of faith. Because he had so little faith in anything.”

“He fished a blue silk handkerchief from his side trouser pocket and blew his nose with a kind of fiendish gusto.”

“Humor is a precious thing. Without it a man is doomed from the start.”

“The only comfort he discovered in his wrath of calamity was the clean, roomy sensation of new socks in well-fitting shoes.”